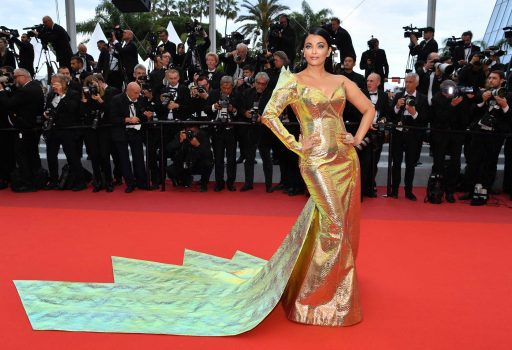 Come May, the French Riviera turns into a celeb paradise, with some of the world’s most talented artistes and actors flocking the Cannes Film Festival. Deepa Kalukuri follows our divas who brought in the Indian flavour with elegance and panache as the world watched in awe

Creative intelligence and trendiest looks on the red carpet make this event a favourite amongst fashion lovers. From Hollywood legends to Asian stars, the Cannes Film Festival is an amalgamation of diverse cinema from across the globe. The celebrities, as always, turned up in their fashion best at the 2019 Cannes red carpet. Aishwarya Rai, Sonam Kapoor, Deepika Padukone, Priyanka Chopra and many other Indian beauties were stunning. We take a look at their gorgeous ensembles. 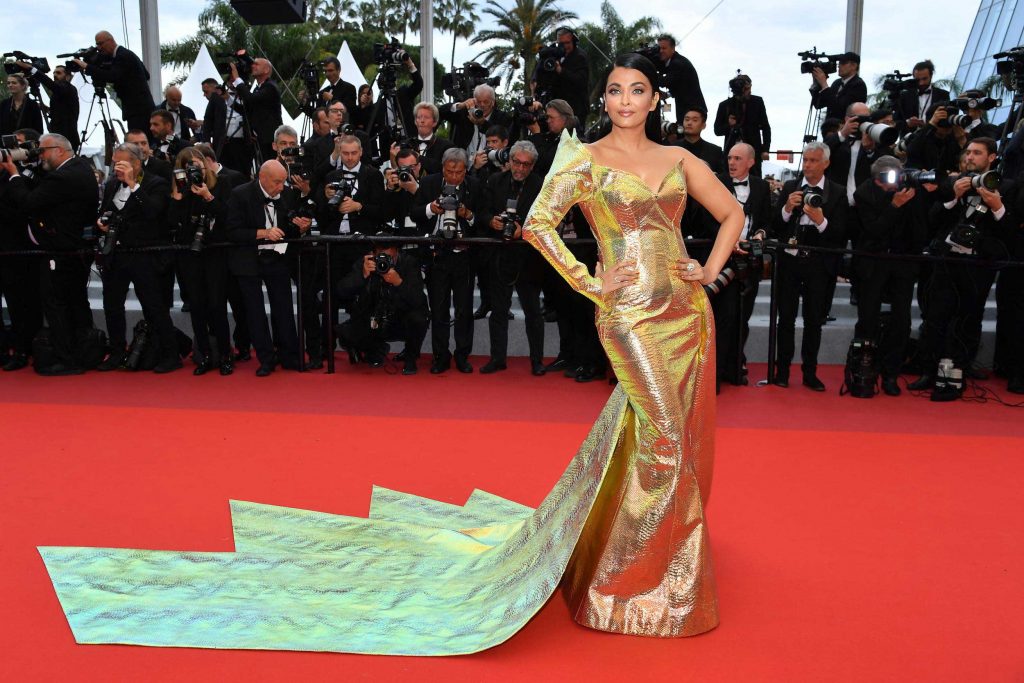 Aishwarya Rai Bachchan has been a regular at the Cannes Film Festival for over a decade and nothing’s stopping this green-eyed beauty. She’s become a Cannes royalty over the years, although she has had her hits and misses when it comes to fashion. Accompanying her at this year’s festival was her seven-year-old daughter Aaradhya, who upped the cuteness stakes in her lemon yellow-tinged flared dress. For her first look, the former Miss World wore a metallic gold gown designed by Lebanese designer Jean-Louis Sabaji. Her first look missed the mark as many fashion lovers were disappointed with her outfit. However, the gorgeous beauty made up for it with a sleek hairstyle by Stephane Lancien and make up by celebrated artist Val Garland. Aishwarya Rai’s second look brought her back in the game with a dramatic faux feathered white gown by celebrity favourite Ashi Studio. This look has made it to the best-dressed lists across fashion magazines, and we couldn’t agree more. The diva continued her fashion party with a custom-made denim cape by Falguni and Shane Peacock for a photo call. She followed this up with a white and red candy gown unveiling her fun side. Her latest look in a sculpted metal wire jacket by Rim Zim Dadu is set to please her fans and fashionistas across the country. We can’t get enough of her grace and elegance! 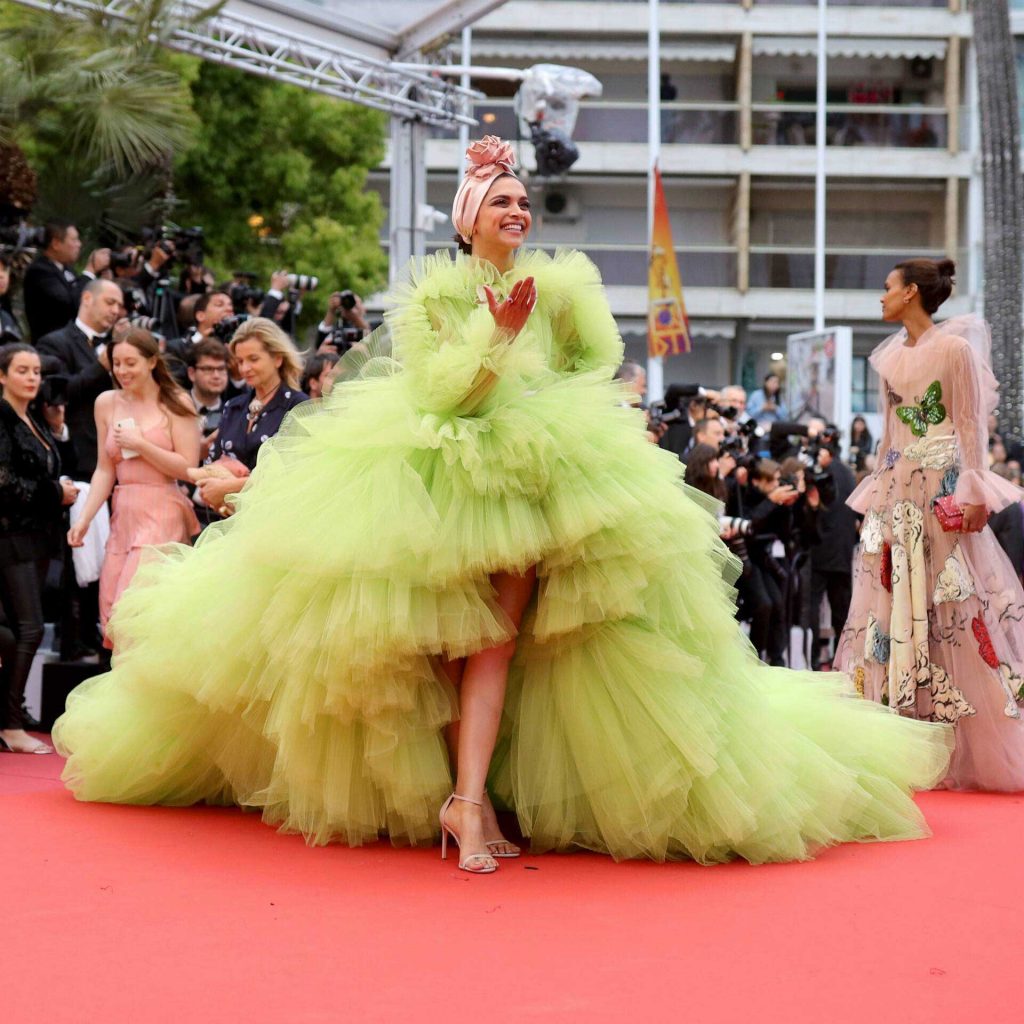 Deepika Padukone is on a fashion roll this year. After making a Barbie-inspired appearance at the Met Gala, she sizzled on the Cannes red carpet in a breathtaking retro gown by Norwegian designer Peter Dundas. Her 1970s bouffant hairdo and the dramatic winged eyeliner set the tone for her monochrome look. She upped the fashion stakes in not one, but four looks on day two, leaving us in awe. If there was a dress-up party that you are missing, it’s Deepika’s! A white and blue striped suit by Loewe teamed with Tangerine pumps, neon-black tulle gown by Italian house Off-White, a white casual outfit by Philosophy and a printed flared number by Erdem, Deepika served the fashion world with some of the trendiest looks of the season. A special mention of her lime-green ruffled gown that took us by surprise! The larger-than-life Giambattista Valli gown appeared to be a nod to the Met Gala theme, and we are spellbound by her walk through the red carpet oozing with confidence. 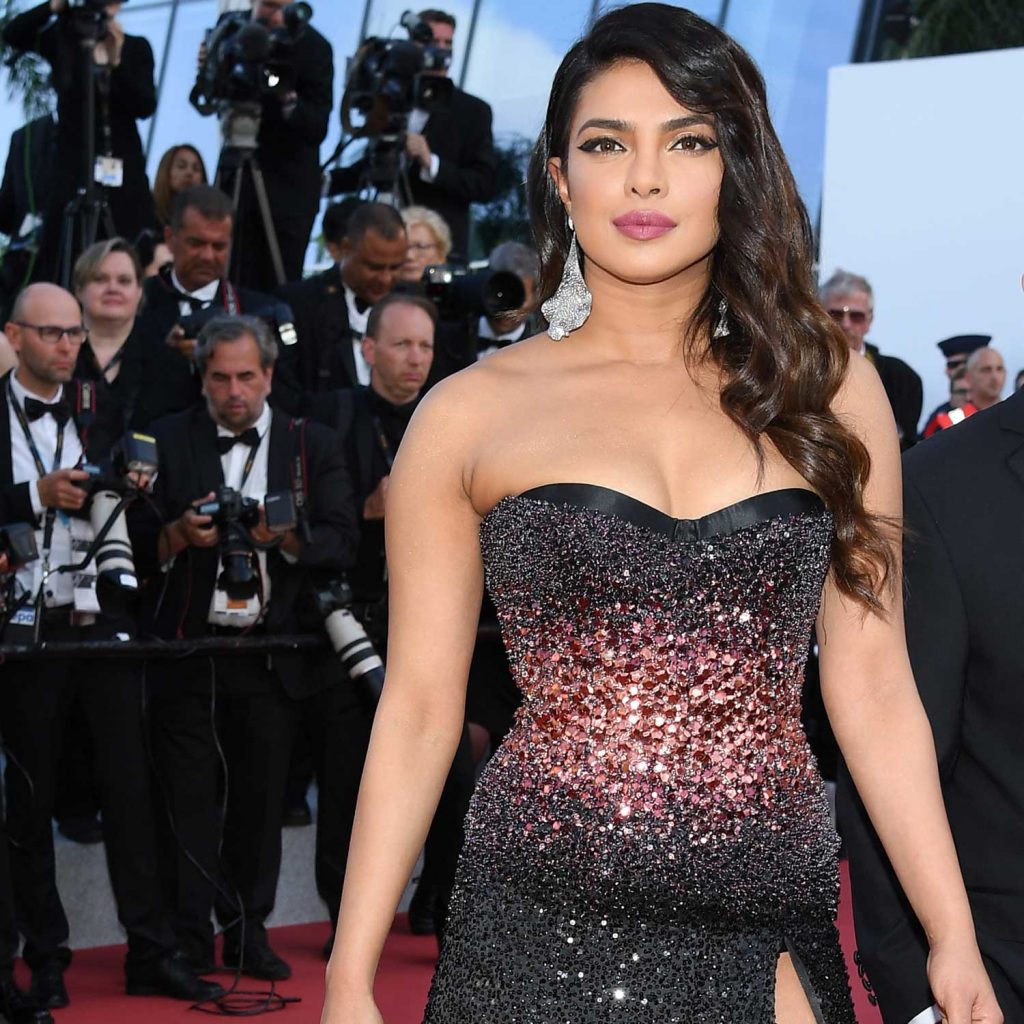 Priyanka Chopra’s Met Gala look went viral this year for the ‘unique’ hairdo. However, her custom-made Dior gown was one of the best gowns this year. She took her fashion celebration to the Cannes red carpet, and we aren’t complaining. Priyanka’s favourite stylist Mimi Cuttrell took it up a notch and styled the newly wed star in a sparkling sequined gown by Roberto Cavalli. Hair by Danielle Priano and sparkling diamond earrings by Chopard left her fans impressed. Looks like white was one of the most favourite colours at the event this year as many celebrities such as Eva Longoria, Bella Hadid, Deepika Padukone and Priyanka showed up for a photo call in all-white outfits. Priyanka wore a pleated white jumpsuit by Honayda, proving that Lebanese designers are soon taking over global fashion. Another all-white look by Priyanka Chopra will forever be one the most talked about from this year’s red carpet. Her strapless white gown designed by Georges Hobeika, another Lebanese designer, was a hit. Teamed with a stunning diamond necklace by Chopard and her musician husband Nick Jonas in tow, we couldn’t ask for more. Priyanka Chopra resumed her fashion parade the next day in a purple number by Fendi that failed to impress the fashion police. However, her backless tangerine gown by Tommy Hilfiger presented her bold fashion sense. 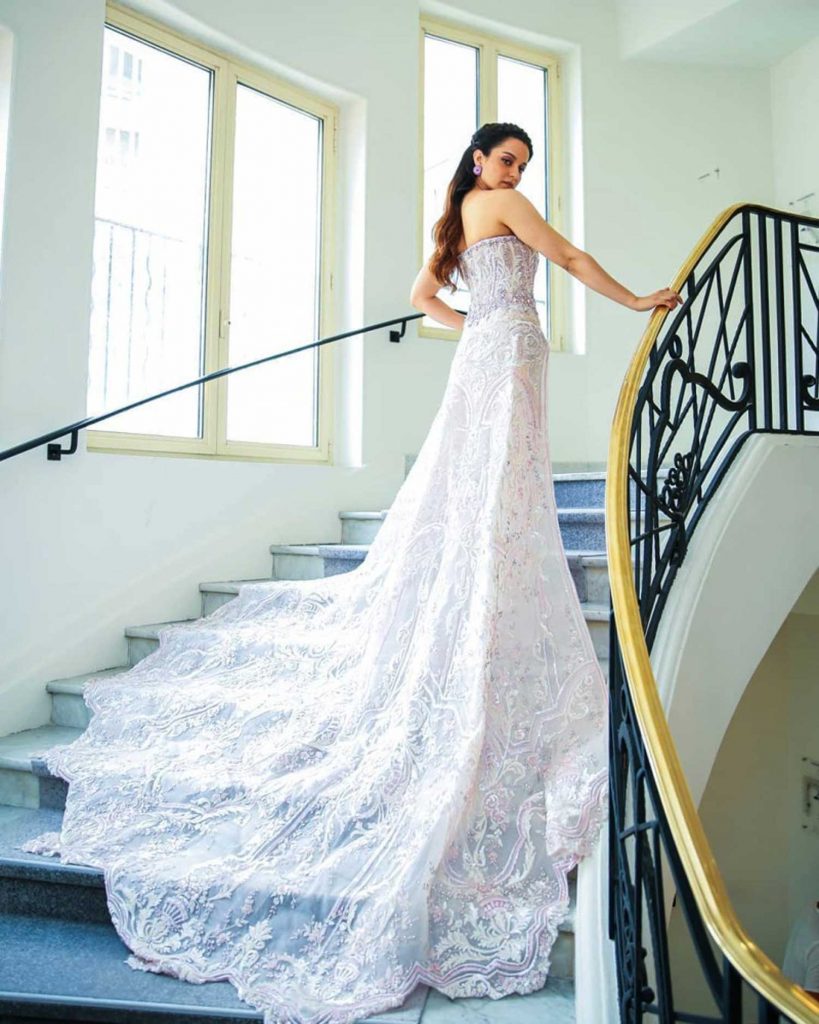 Talking about bold, Kangana Ranaut never disappoints. Bollywood’s ‘Queen’ arrived for the first day at Cannes in a risky outfit. She teamed a Kanjivaram silk sari with a peplum corset belt designed by Falguni and Shane Peacock. Although we loved her adventurous take on the traditional sari, we didn’t quite warm up to the gloves styled with this look. Her next warrior-inspired pant-suit by Turkish designer Nedret Taciroglu was bold and feisty. Although Aishwarya Rai gave one of her trusted designers Michael Cinco a miss this year, Kangana went for a Cinderella gown by the Filipino designer. The intricately embroidered white gown was spectacular and the sleek hairdo complemented her beauty. Like we said earlier, white has been this season’s celebrity favourite and why would Kangana be left behind! She turned out in a one-sleeved dress by Toni Maticevski and was one of the best-dressed stars at the Chopard party! As she bid goodbye to the French Riviera, Kangana celebrated spring in her halter-neck Ralph and Russo resort dress. She left her natural curly tresses flowing, easing into the day on a yacht! 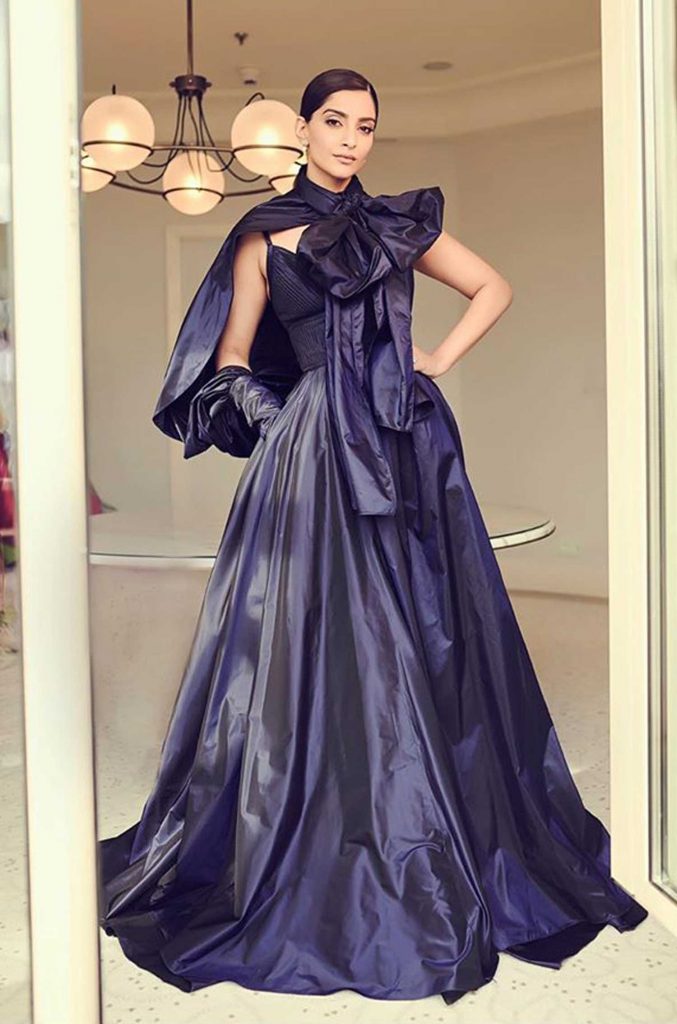 Sonam Kapoor hit the Cannes red carpet a bit late, but as usual, made it a memorable one.  She opened her fashion lookbook with a bang in a ruffled red Valentino gown, adding to the spectacular looks by Indian divas this year. Styled by her sister Rhea Kapoor, Sonam appeared for a photo call in an acidic black bow gown by Elie Saab. A sleek pulled back hairdo complemented her sharp jawline! Sonam brought in the Indian flavour in an ivory lehenga-gown designed by Bollywood’s go-to designer duo, Abu Jani and Sandeep Khosla. The choker and the drape from this outfit are sure to set some trends this year for Big Fat Indian weddings!
Apart from these gorgeous stars, a few other Indian beauties made their debut at the Cannes Film Festival this year. Like their peers, Diana Penty, Huma Qureshi and television actress Hina Khan didn’t fail to impress. Some of our favourites were the faux feathered gown worn by Diana Penty designed by Nedret Taciroglu, Huma Qureshi’s mauve gown by Gaurav Gupta and Hina Khan’s translucent metallic gown by Australian designer Alin Le’kal!
It’s safe to say that the outfits worn by Indian beauties at the Cannes Film Festival 2019 were a hit and hardly a miss! Not to forget, their confidence and charm have been impressive on this global platform.