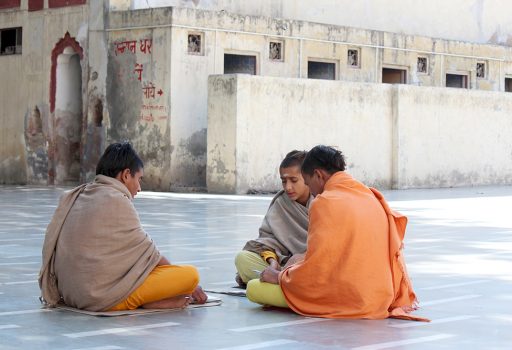 Learning has always been central to the Indian ethos. Susan Philip traces the approach to education in India over the centuries 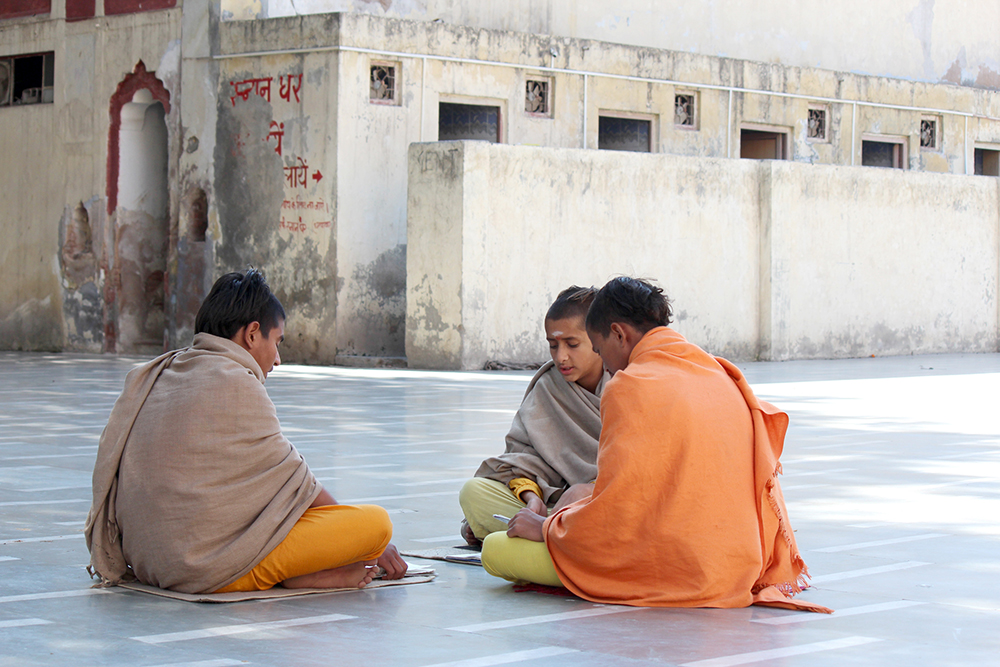 ‘Education is the best friend. An educated person is respected everywhere. Education beats beauty and youth,’ so said Chanakya, teacher and advisor to ancient Indian nobility.

That’s the kind of value India placed on education — Vidhya — even in the hoary past. If anything, this importance has only increased in modern times. It’s the dream of every Indian parent, both within the country and outside, to see their child excel in academics, win medals and acquire degree after degree. In May this year, seven of the record eight students who won the prestigious Scripps National Spelling Bee in the United States were of Indian origin!

Living and Learning
In Vedic times, boys were sent to learn from scholarly men when they were as young as five or six years old. They would live with the family of their teacher till they had absorbed all that the Guru — literally, one who dispels the darkness of ignorance — had to teach them. The students were treated as part of the Guru’s household, and did whatever chores were allotted them in return for the education they received at the Gurukuls, as these houses of learning were known. Education was imparted in both theory and practice in various disciplines, generally in the fields appropriate to the caste to which the student belonged — Brahmins (the priestly class) were taught scriptures, Kshatriyas (warrior class) were taught warfare and Vaishyas or traders, business-related subjects. Women were not totally exempted from education. Lopamudra, Sulabha, Maitreyi and Gargi were among the famous learned women during Vedic times in India.

The lower classes were, however, not generally included in this scheme of things.

Traditionally, students gave a dakshina or offering to teachers in appreciation of the knowledge and skills imparted to them. In the Mahabharata, Dronacharya was the Guru of the Pandava and Kaurava princes. He taught them aspects of combat. Young Ekalavya, who was not a Kshatriya, was fired by the determination to be a great archer. Since he couldn’t be Drona’s disciple, he made a statue of the Guru, worshipped it, and set out on a path of self-study. In course of time, he mastered the art. Arjuna, one of the Pandavas, considered unrivalled in archery, was astounded to see the evidence of Ekalavya’s skill. When Dronacharya came to know how Ekalavya had become such a good archer, he demanded his right thumb as dakshina. Ekalavya unhesitatingly cut off his thumb and presented it to his Guru and so became the epitome of a good shishya or disciple. He also went on to re-master archery sans his thumb! 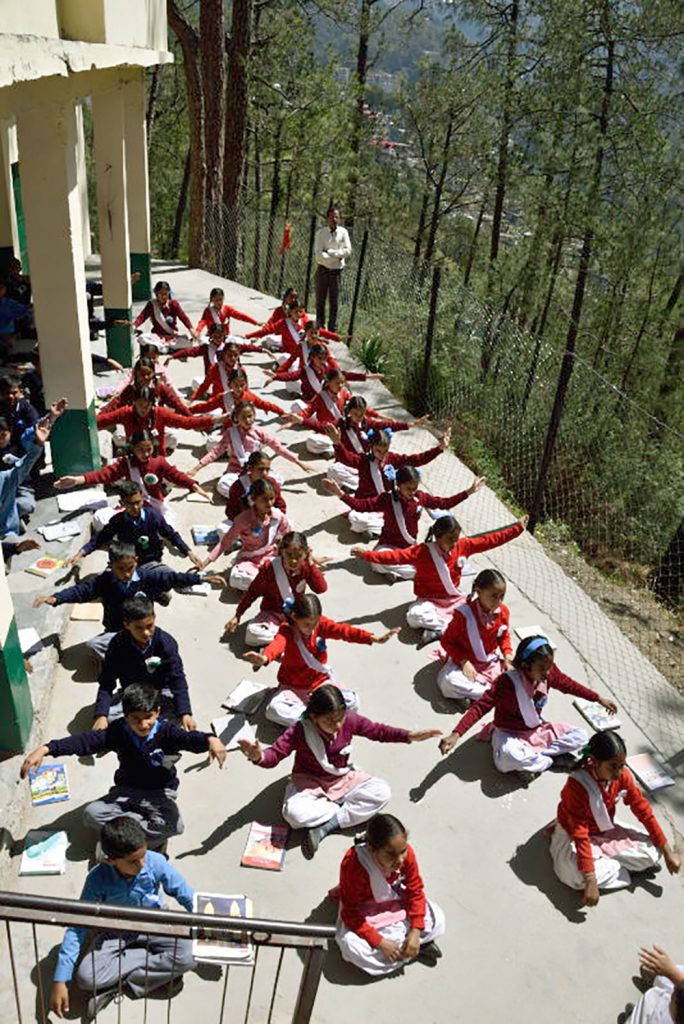 Meeting of Minds
During the Buddhist period, education became more inclusive. It was thrown open to all classes and castes. Youngsters were taught by learned monks in monasteries. There was a separate order for women monks or Bhikkunis, and Dhammadinna, Khema and Uppalavanna were among the most learned Bhikkunis.

Takshashila, in present-day Pakistan, was perhaps the world’s first University. Here, Panini wrote his treatise on Sanskrit grammar, and Kautilya, as Chanakya was also known, wrote his Arthashastra — on statecraft. Viharas, or small monasteries used by itinerant monks, became centres of learning, and subsequently evolved into centres of higher learning. Nalanda, in what is Bihar now, developed from a Vihara. The curriculums at these institutions covered religious and secular subjects, Indian and foreign philosophy, logic and sciences like astronomy and medicine. Students from various countries came to these universities and took back knowledge, which was further developed as it spread across the globe.

The respect accorded to education in the Vedic and Buddhist periods is reflected in the way it was linked to religion and rituals. In a broad sense, this has continued into modern times. On the auspicious Vijayadasami day, after prayers, young children are initiated into the world of learning by a scholarly person who helps them trace sacred verses or words on a plate of rice grains. This is called Vidyarambham or the beginning of education. Similarly, the Upanayanam or thread ceremony is a rite of passage when young Brahmin boys are considered ready to begin learning the Hindu scriptures.

The Emperor and Education
With the coming of the Mughuls, education in India crossed another milestone. To Emperor Akbar belongs the credit of making education systematic. Curiously enough, he himself had no formal education. But he had a thirst for knowledge. He opened many schools and colleges, apart from madrassas attached to mosques, and threw education open to the poor, irrespective of caste or creed. He introduced changes in the curriculum, making it more broad-based, and reflecting the influence of developments beyond the country. He established a library exclusively for women. Vocational training was imparted by means of a system of apprenticeship. His policies were continued by his successors, for the most part.

English Learning
Once the British established their hold on the subcontinent, they changed many traditions in many fields. Education was no exception. In 1835, Lord Macaulay introduced a policy to propagate the English language and Western-style education. In 1884, a comprehensive plan was formulated for spreading education in the subcontinent. A three-layer system was set up, with primary schools at the bottom, followed by high schools, and colleges at the top. The Universities of Calcutta, Bombay and Madras were set up.

The Right (to) Education
In Independent India, education was given the priority it deserves. There are 12 provisions in the Constitution relating to education. The Right to Education Act makes it a fundamental right of all children to have free and compulsory education between the ages of 6 and 14.

Today, there are several formats of school education. They mostly follow the 10 +2 pattern, with students getting to choose a broad area of focus — Science or Arts — in the last two years. The CBSE or Central Board of Secondary Education is the most widely followed. Others include ISC/ICSC and the IB. Each State has its own Board too. There are also various types of schools — government-run, government-aided and private, as well as international schools. There are institutions run by religious groups, including ‘convent schools’ or schools first established by Christian missionaries. Similarly, there are government-run colleges, aided and private ones, some run by institutions owing allegiance to one religion or another.

Pre-schools or ‘Play Schools’ cater to the needs of very young children, and for them, schooling begins when they’re as young as two-and-a-half years old.

Over the years there have been efforts to standardise School Boards and achieve some commonality in syllabuses, teaching methods and evaluation. The latest draft Education Policy seeks to address the challenges of access, equity, quality, affordability and accountability faced by the current system. But achieving commonality is no easy task, given the diversity of the country, its people and their needs. Different languages as mediums of instruction add to the problem.

Be it constitutional provisions, mid-day meal schemes, construction of toilets in schools, supply of free uniforms and even adult education initiatives, various governments have introduced innovative measures to spread literacy.

The question then arises: Are literacy and education the same? 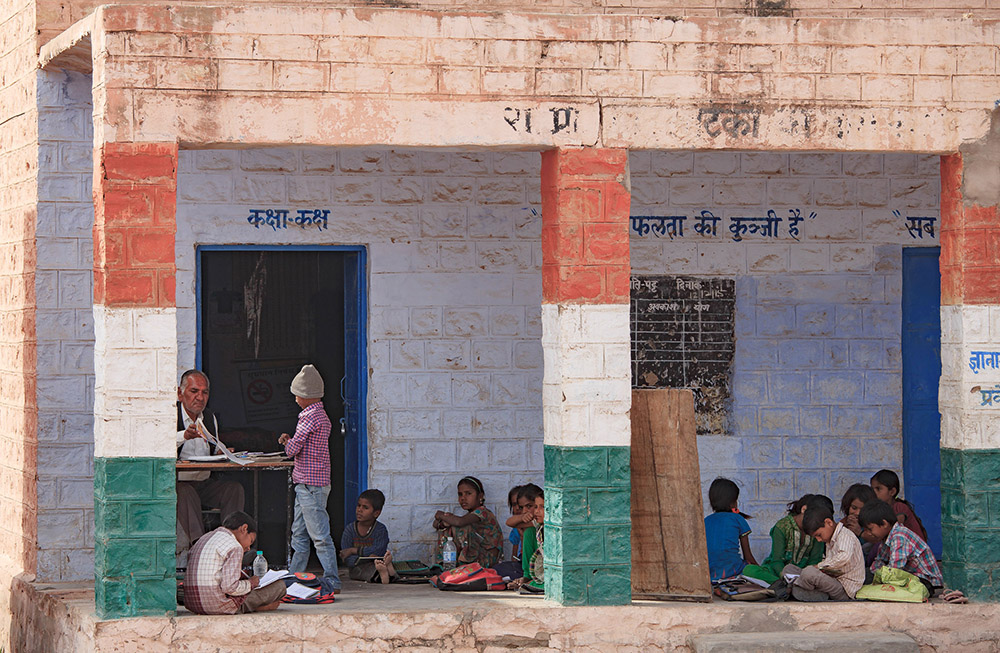 Different School(ing)
‘To understand life is to understand ourselves, and that is both the beginning and the end of education,’ J. Krishnamurti, philosopher and writer.

In what is essentially a rejection of mere book learning without a corresponding understanding of underlying concepts, and the consequent inability to apply such learning to real life, alternative methods of education are being tried out in India, both as formal schools and as informal means of inculcating knowledge.

The Waldorf School Initiative, among the fastest growing independent school movements in the world, has several institutions across India. Their curriculums focus not only on a child’s mental and physical development but also on the connection between soul and spirit.

In a throwback to the Gurukul system, the Isha Home School near Coimbatore, set up by Sadhguru Jaggi Vasudev of Isha Foundation, has young children living together in ‘homes’ on campus, supervised by house-parents. They are taught without the pressure of examinations till they enter Senior School, where they are trained to meet the standards of the Boards to which the school is affiliated.

Arvind Gupta, an IIT alumnus, has dedicated himself to creating simple toys and carrying out experiments using local materials and items discarded as trash, to popularise scientific concepts in a fun way. His efforts have proved hugely popular among children, far more so than standard textbook learning.

‘The purpose of education is to make good human beings with skill and expertise… Enlightened human beings can be created by teachers,’ Dr. A.P.J Abdul Kalam, former President of India and teacher by calling.

In the following pages, we examine schools offering varied approaches to education.