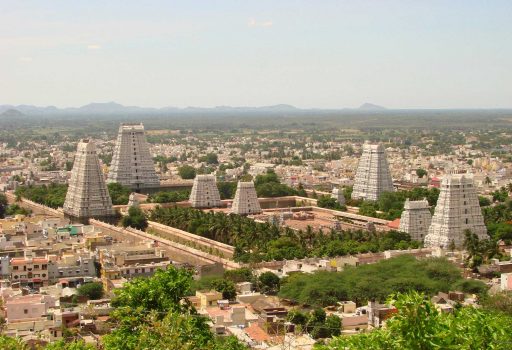 India is a land of stories, which are celebrated through the numerous delightful festivals. Meera Srikant takes us on a mythological journey for Karthigai Deepam, celebrated on December 10, considered to be the second Deepavali and rejoiced by many Hindus in the South as a harbinger of prosperity 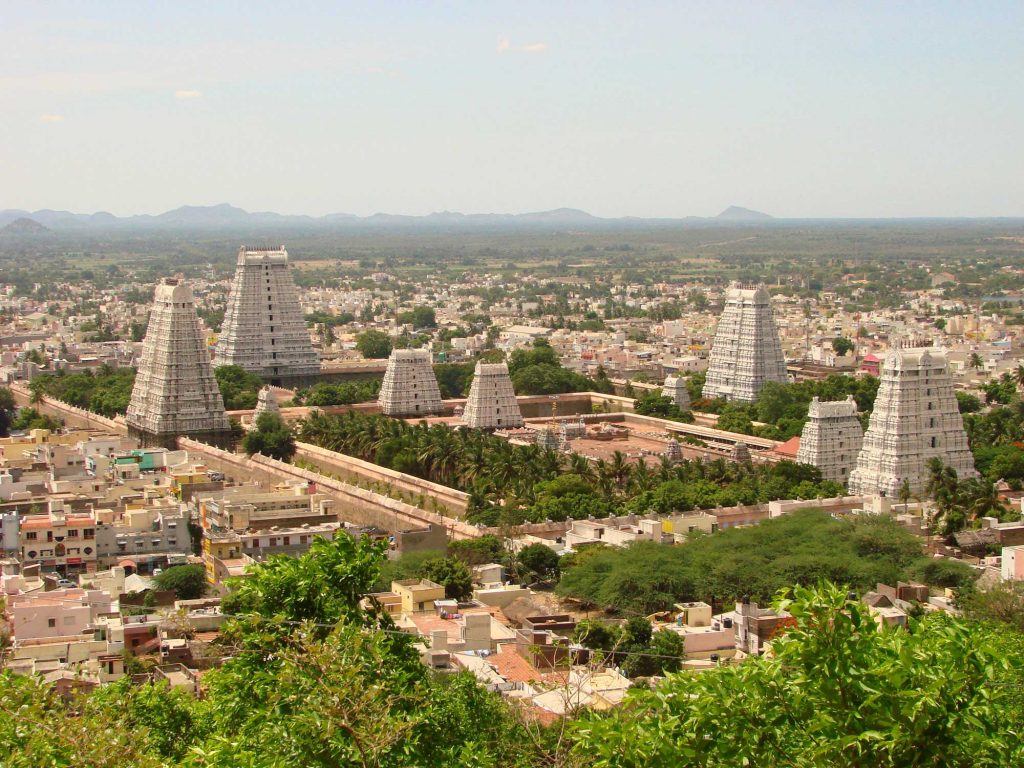 The finite mind cannot grasp the infinite. In Hindu philosophy, the divine is said to manifest itself in many forms. Stories are a medium that make this infinity more relatable. The many festivals celebrated throughout the year in India are all associated with these stories and serve as reminders of how the divine reveals itself. While on the face of it there is much fanfare and many goodies that go with celebrations, these festivals are also a time to introspect and contemplate.

One such festival is Karthigai Deepam, and here is the story behind it.

Brahma and Vishnu, two of the Hindu Trinity, wanted to establish their own superiority and refused to give in even an inch to the other. Shiva, the third, smiled knowingly and said, ‘He who finds Shiva’s topmost or bottom-most part first is the greatest.’

This seemed like child’s play to the other two. But wonder of wonders, the column of fire that represented Shiva grew and grew. Vishnu as the boar was unable to fathom the depth. Brahma on his swan could not fly high enough to reach the head.

There is more to the story. But this column of fire is worshipped as Agni Linga in Thiruvannamalai in Tamil Nadu as part of a 10-day festival. The hill is called Arunachala, meaning holy fire hill. Right next to the hill is a temple dedicated to the Lord, built by kings to enable the common man to see the Lord in the familiar form of a Linga.

Celebrating the Infinite
Every year, on full moon day in the Tamil month of Karthigai (November 15 to December 15), when the moon is in the star Krithigai (Alcyone), a lamp is lit in Thiruvannamalai to signify the awe-inspiring event of Shiva manifesting himself as the column of fire.

On the Arunachala Hill, the 2,668-feet-high holy mountain, nearly 3,500 kg of clarified butter is used to light the Maha Deepam (great lamp), which is visible from a 35-km radius around the hill. The festival begins a day preceding the Karthigai festival, on the star Bharani, when five lamps are lit to signify the five sacred elements – earth, air, fire, water and ether. As these five flames loom up with red-yellow light, the famous, one-day South Indian festival of Karthigai Deepam officially begins. A single flame taken from the lamps is kept alit in the temple throughout the day, symbolising the merging of the elements into its one source, and is celebrated as Bharani Deepam.

Lakhs of devotees perform Girivalam (circumambulation of the holy mountain), walking 16 km around the temple. Kohl from the lamp is distributed to devotees as a blessing in the Tamil month of Margazhi that follows, on another auspicious day. In Koneswaram and Trincomalee in Sri Lanka, Karthigai festival is celebrated for three days. A huge lamp is lit on the hills on which the two temples stand and can be seen for several kilometres.

Lighting of lamps
Throughout the month of Karthigai, people of Tamil Nadu, Kerala and Andhra Pradesh light small oil lamps because it is considered to be auspicious. In Andhra Pradesh, on the day of Karthigai Deepam, oil lamps with 365 wicks prepared at home are lit in Shiva temples. The people also fast every day till sunset and read Karthigai puranam (history).

Another story attached to this festival is that of Lord Muruga. From the spark from the third eye of Lord Shiva were born six babies in the lake called Saravana Poigai. Goddess Parvathi united the six forms into one on this day, and Arumuga took his divine form with six faces and 12 hands.

Lighting of lamps has a spiritual connotation, representing victory of good over evil. This festival also is the South Indian way of celebrating the love between brothers and sisters, when sisters pray for the well-being of their brothers by lighting clay lamps.

Food for the Senses
This is also a time when children gorge on tasty snacks such as pori urundai, made of puffed rice and jaggery, peanut balls and appam made by soaking and grinding rice and urad dal into a thick batter, mixing jaggery and deep frying it. Some also burst crackers to ring in the auspicious day.

As done during Deepavali, crackers are burst for Karthigai too. Traditionally, the non-explosive rotating cracker called chakra is made at home by youngsters and elders in the villages of Tamil Nadu using charcoal. Charcoal is crushed and packed into a coconut shell. This is placed tightly inside three twigs, flexible wood stick or plant stem, which is tied using coir or jute ropes with a length given for safety. Smouldering charcoal is placed over the packing and slowly ignited by blowing hard or rotated. As the packing starts to catch fire, it rotates faster and the packing starts to crackle.

In the cities, mostly chemical crackers are burst, but with time this practice has come down. Lighting of lamps, however, continues to be practised.

Celebrated in the month of Karthigai, Govardhana Puja commemorates Lord Sri Krishna lifting the Govardhana Hill to protect the residents of Vrindavana from the wrath of Indra. 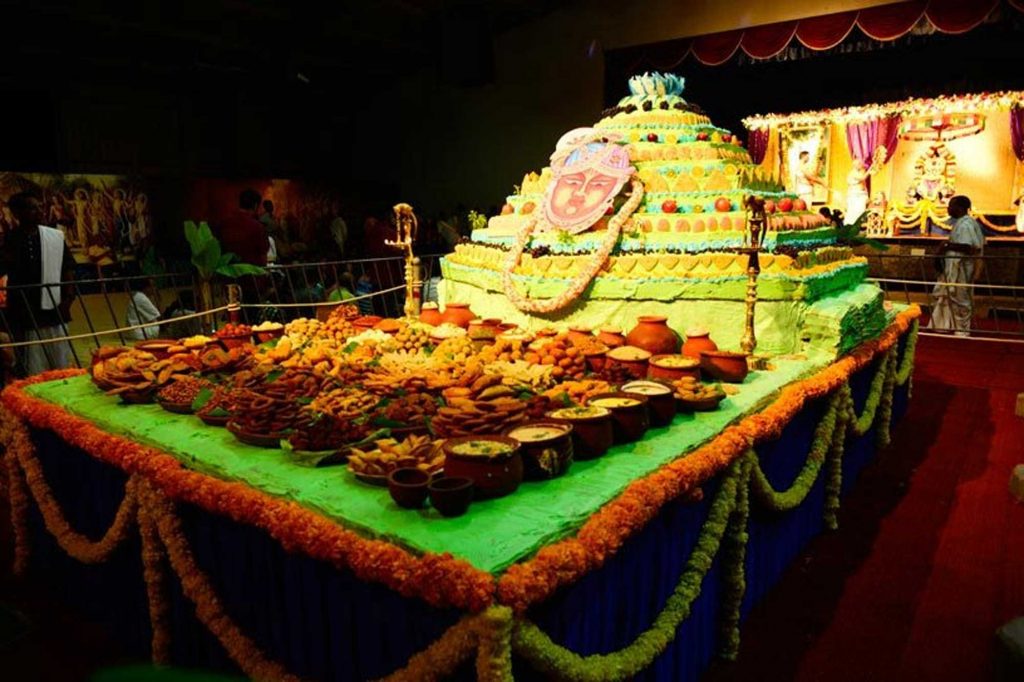 When Lord Sri Krishna saw the residents of Vrindavana preparing for Indra-yajna, he suggested that instead of Indra they should worship the Govardhana Hill. On coming to know of this, Indra became angry and sent a devastating rainfall over Vrindavana. Krishna picked up the Govardhana Hill with his little finger, and gave shelter to all the inhabitants of Vrindavana. Indra became conscious of his offense and begged for forgiveness from Krishna. Thus, it was established that a devotee who has surrendered to the Supreme Lord and engages in devotional service is free from all obligations and need not worship any demigods for material favour. This is known as Govardhana Lila and is described in the tenth canto of Srimad Bhagavatam.

As per the instructions of Krishna and following in the footsteps of the residents of Vrindavana, this festival is celebrated every year in the month of Karthigai. Devotees prepare varieties of foodstuffs with grain and ghee and all kinds of milk preparations. The food is stacked like a small hill and offered to the Lord. It is then distributed to everyone as prasadam. Hence, this festival is also called Annakuta Festival.