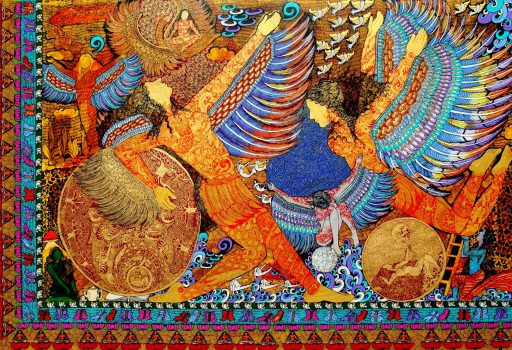 Meet artist Seema Kohli whose canvases are layered with many, many stories rooted as much in philosophy as in knowledge gained in modern times; a parable of tales both imagined and real 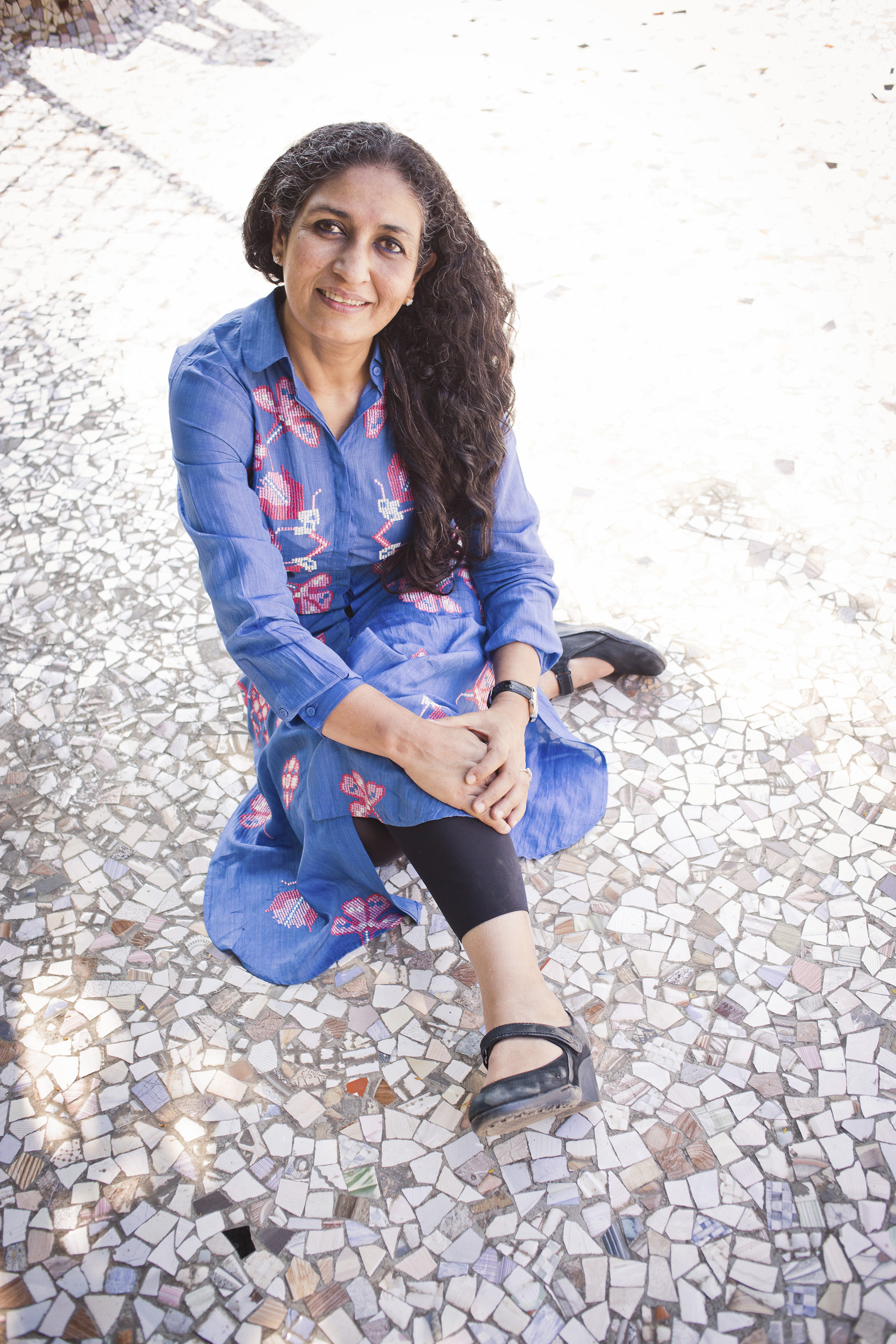 Born in 1960, Seema Kohli has created her niche in the world of contemporary art over the past 35 years. Her creative repertoire is eclectic, encompassing a wide range of mediums ranging from painting, murals, experiential installation performances and films to installations and sculptures, and each is a unique expression of her style. Working with oils on canvas, inks, mixed mediums, ceramics and printmaking, her work has redefined the basic contours of figurative art in India. Kohli’s series titled ‘The Golden Womb’ or the ‘Hiranyagarbha Koham’ series propelled her into much acclaim. Her work captures in its entirety the perpetual change, order, strength and fragility, colours and rhythm, and melody and exuberance of the elemental world. It talks about the creation, the cosmic journey, of the oneness of being and the final liberation in relation to the golden womb or hiranyagarbha.

Seema Kohli has had over 30 solo shows in Venice, Brussels, Melbourne, London, New York, Dubai, Singapore, Delhi, Mumbai, Hyderabad, Bengaluru, and many more. She has had interactive sessions and experiential performances at WuWei Wisdom Sanctuary Bali 2016, Venice Biennale 2015, TedEx Chennai 2013, WIN Conference Rome 2012, and so on. She received a Gold at the Florence Biennale 2009 and her works are part of various private and public collections such as the Melinda Bill Gates Foundation, museums including Rubin’s Museum and MOSA-Brussels, Kochi Museum of Arts, and many more. 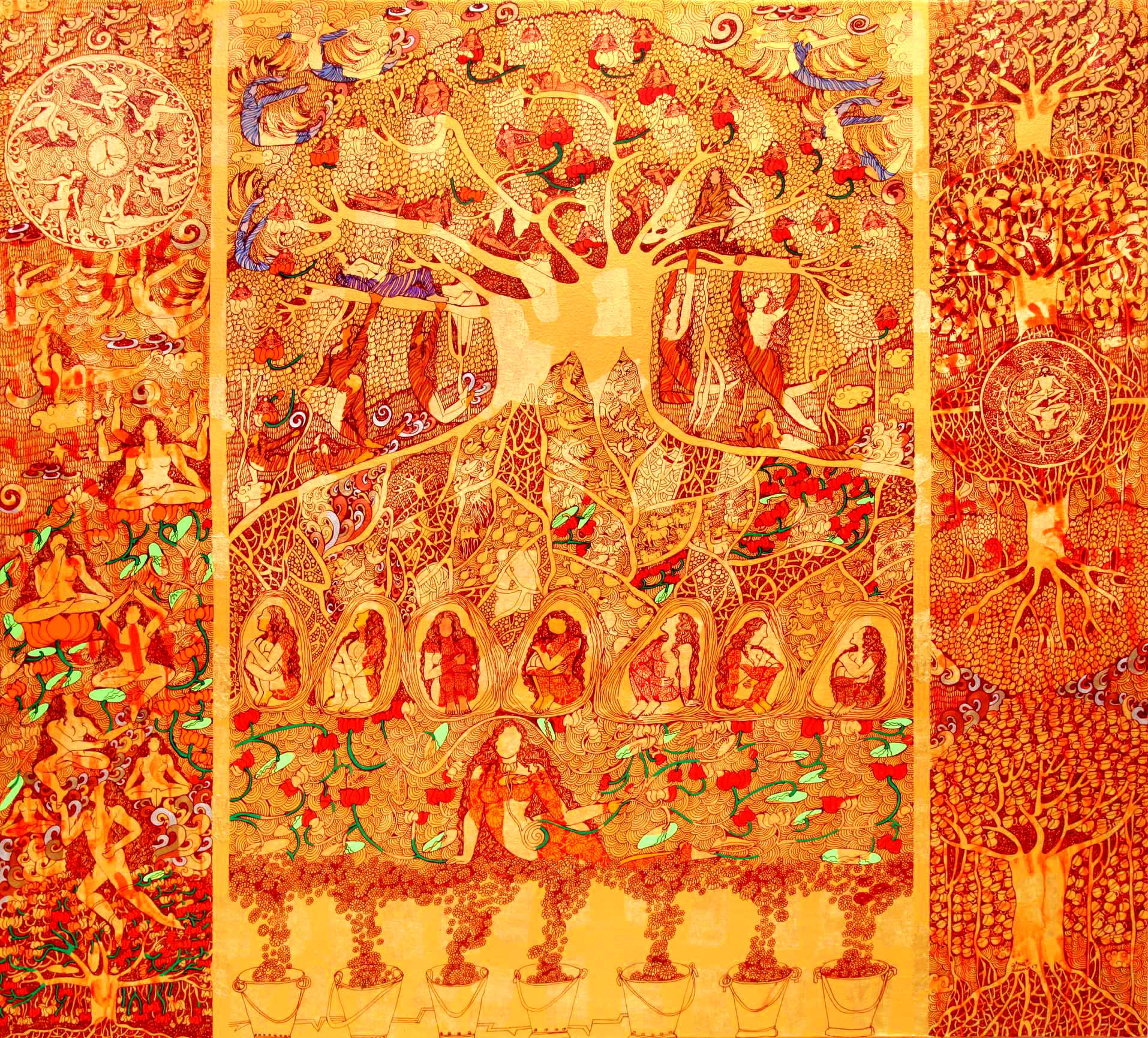 The artist, in conversation with Culturama, talks about her journey.

Can you tell us about your childhood and growing up years? Did they have an influence on your art?

Childhood was full of stories and dreams, watching the soft cotton elephant clouds roll by, of birds, butterflies and bees, watching my mother adorn her hair with jasmine and waking up to the early morning sound of heavy wooden wheels of bullock carts. The sounds, the smells and visuals of my childhood constitute my art.

How did art happen to you?

Colour was introduced to me at the age of two or three, just as it is introduced to any child of that age. But it stayed with me; and as I grew it became my friend with whom I shared my most personal thoughts, creating my own coded language of images and symbols. 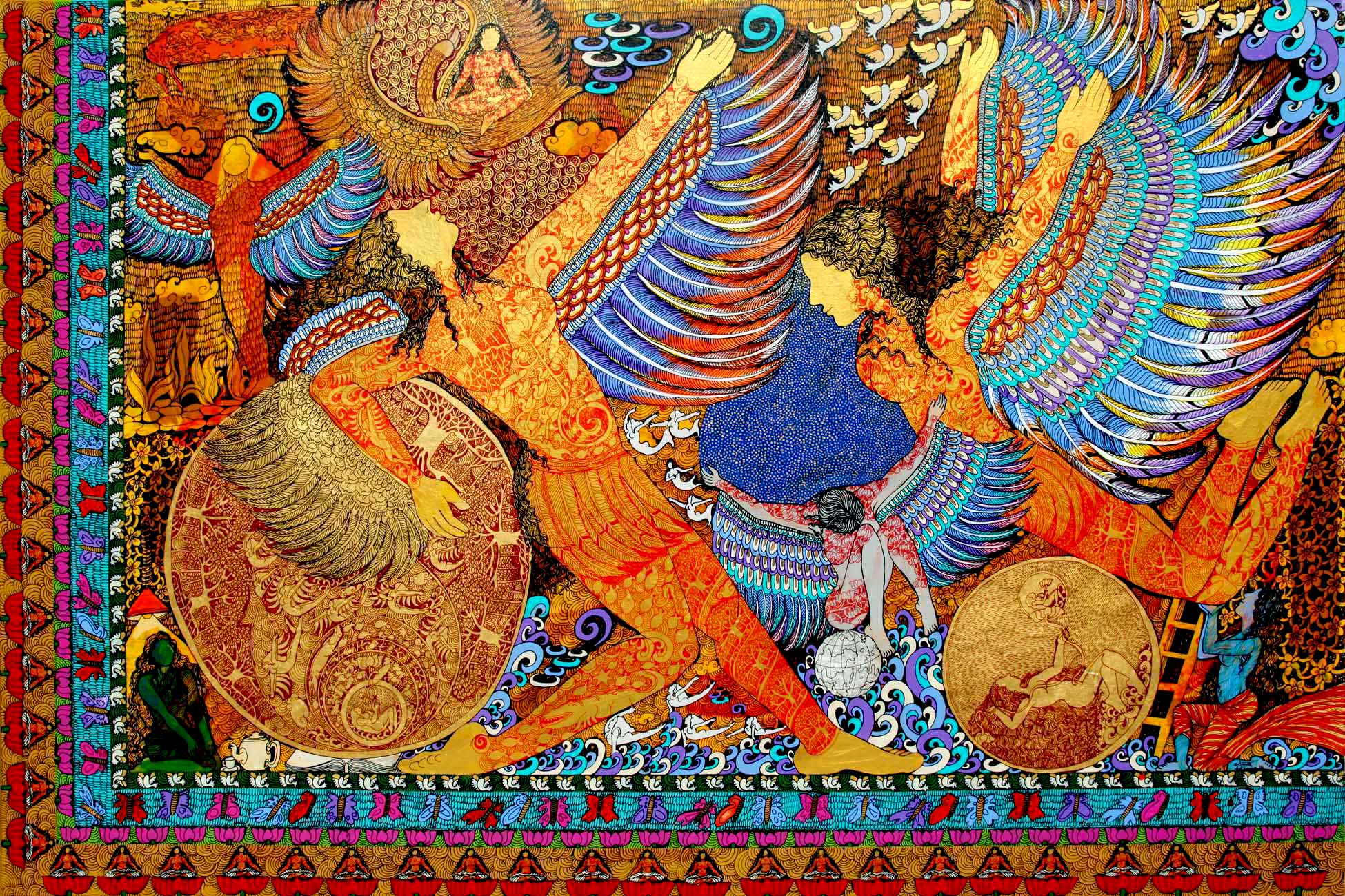 Your art exudes philosophical and mythological leanings, while also celebrating the female power, stree shakthi. How important are these three to you?

I grew up in a spiritual household where religion and ritual took a back seat, but the lives of people who grew above the human limitations were discussed. The mythical stories were humanised and made believable. We had dialogues and discussions and the spirit of questioning was nurtured. But the idea of the feminine and the role of energy and its inter-relation came much later. The celebration of birth and constant evolution has taken over my art practice in all mediums.

Can you take us through your creative process?

I must confess that I do not have any rough sketches of the artwork before hand. I start with a blank white canvas with a simple invocation of the Lord of Intellect and Lord of Luxury to come and reside on my canvas. I then layer it with silver leaf which deoxidises so that it does not become dark over a period of time. Then I start layering the canvas with sometimes 12 to 13 washes of acrylic colour. Then it is finally ready for my drawing and rendering – with stories and, finally, I finish it with drawings on 24 carat gold leaf expressing the golden womb, the Hiranyagarbha.

What upcoming project are you most excited about?

The most important project just now is my visit to about six universities in the United States, where I am sharing my practice with the students and people. I will be talking about my performance/crossover of mediums in interactive sessions and workshops. 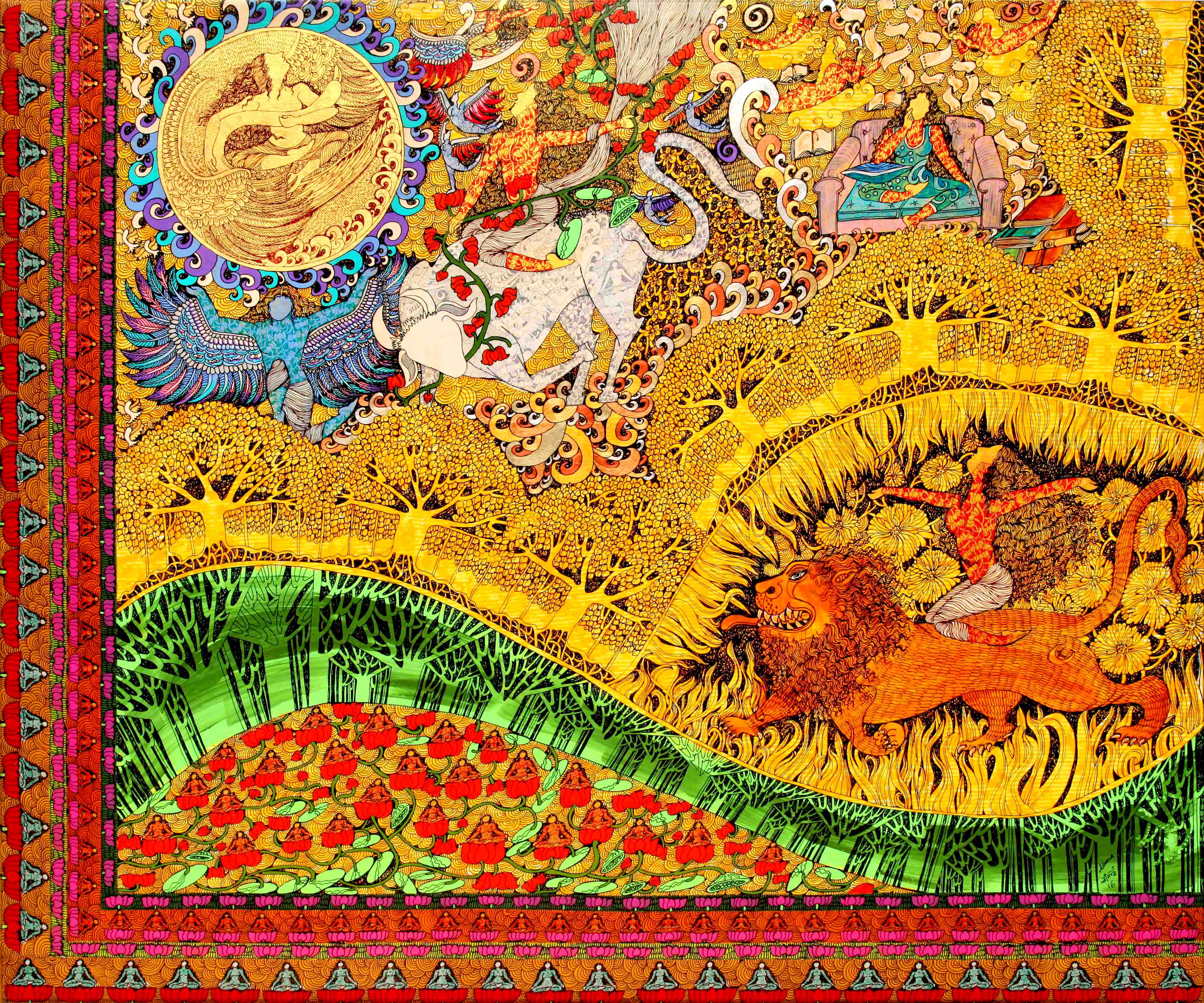