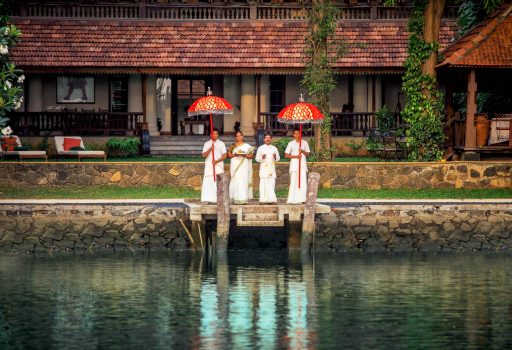 It’s only in South India that I realised the possibilities of cultural conservation, says 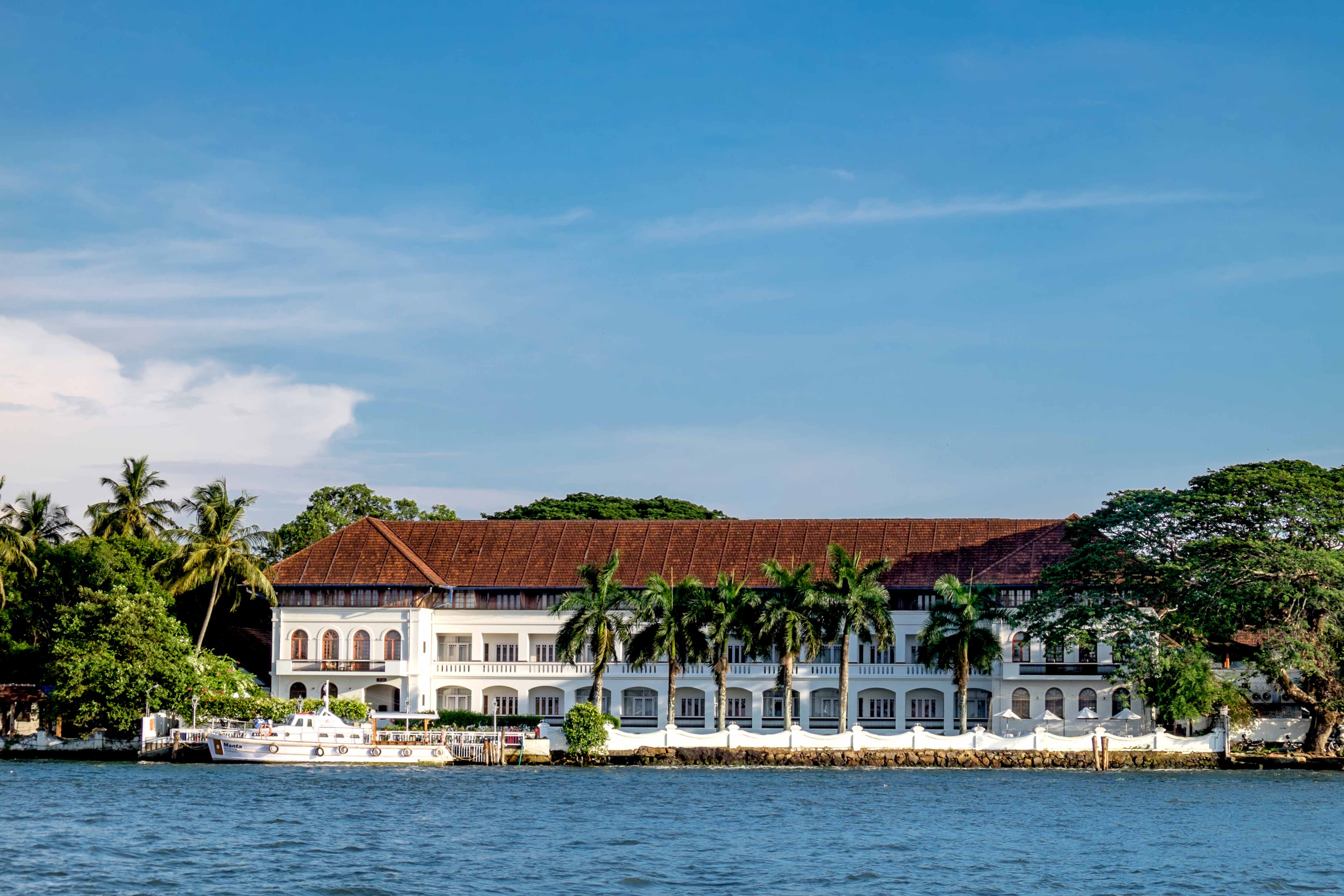 Conservation seldom receives consideration in India, be it of natural resources or, even increasingly, culture – there is so much of it that it sometimes gets neglected, which is when erosion and dissipation commence. Kerala, however, projects a well-conserved countenance. Whilst the conservation of resources can be effected by mindful individuals in rudimentary ways, the conservation of culture is a far more complex undertaking to which Kerala has brought much imagination and sophistication.

Jose Dominic of CGH Earth has certainly crusaded for the cause. I had heard much about him in niche travel circles. He is perhaps the most fascinating man in Kerala. He is also perhaps the busiest man in Kerala. But swinging by Kerala last month, I finally met Jose Dominic, who is better known for “creating” tourism in Kerala. He is less well known for pioneering “conservation” as a clever, systematic and refreshingly different approach to luxury tourism in South India.
As a travel writer I have experienced world-renowned resorts upheld as bastions of conservation, but they are often confined to energy and environmental conservation. It is only in South India that I realised the possibilities of cultural conservation after my inaugural CGH Earth Experience (Jose Dominic calls his creations “experiences” and not hotels). I recall in 2011 at Visalam in Chettinad this retreat impressed itself on my mind by being earth-conscious (not usual in India). There was an “Earth Hour” when the lights were knocked out for an entire hour at the entire property but this austerity was not devoid of romance as the General Manager hosted a candlelight supper by the garden pool and established the urgent need to conserve electricity (certainly in Tamil Nadu!). Plastic is a no-no too over a CGH Earth experience, so bags are of paper and water is bottled in glass. 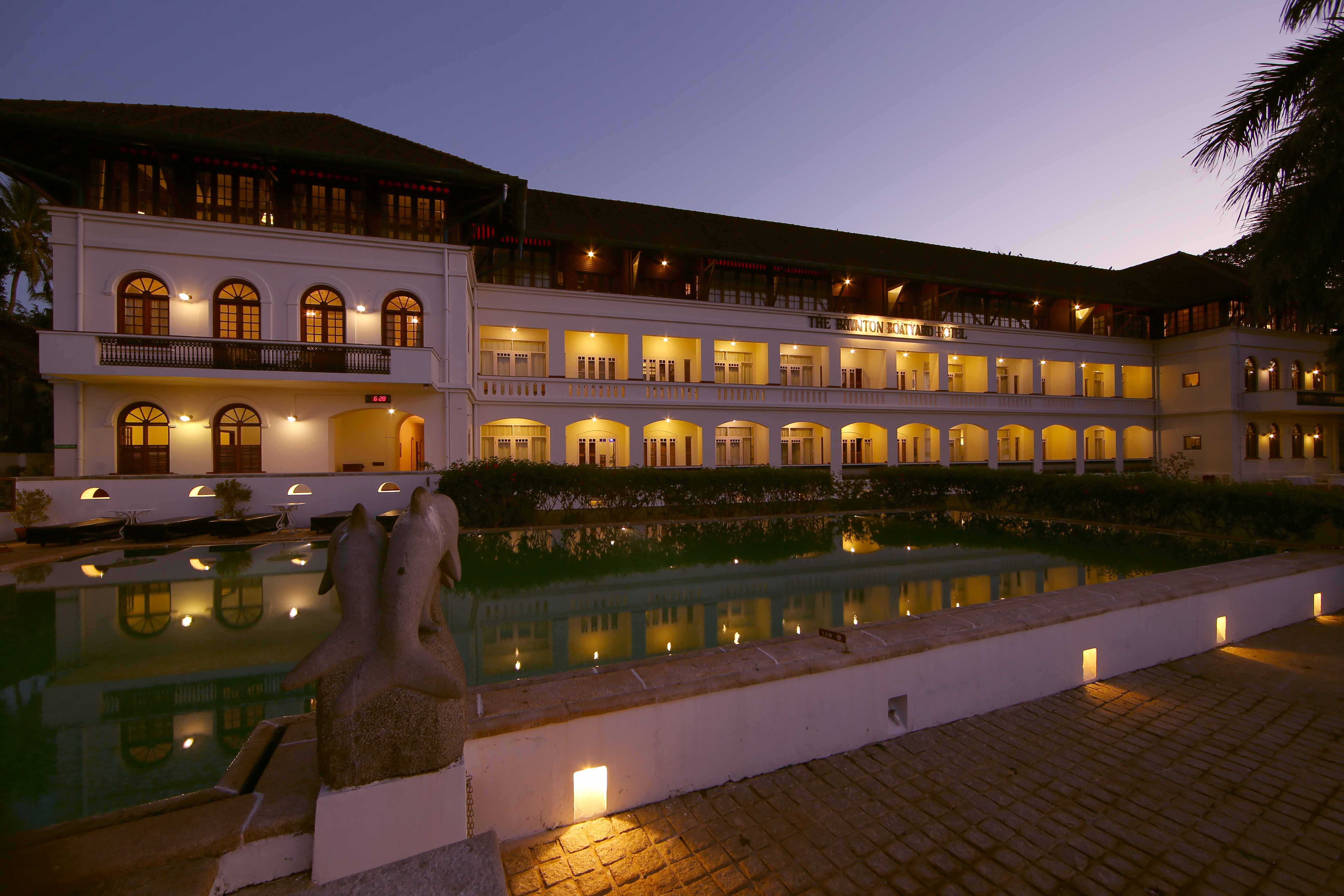 On a more recent visit to Visalam, I see posters of Parisian cafes on the poolside veranda and wonder why they are a part of the otherwise emphatically Chettinadu property. “Mr Dominic found those in the Karaikudi Antique Market” is the manager’s response. This immediately gives a local context to the adornments and it is this attention to detail that imparts a sense of place and preserves culture within the confines of a hotel. Every incidental embellishment is infused with local culture and is not just randomly placed. 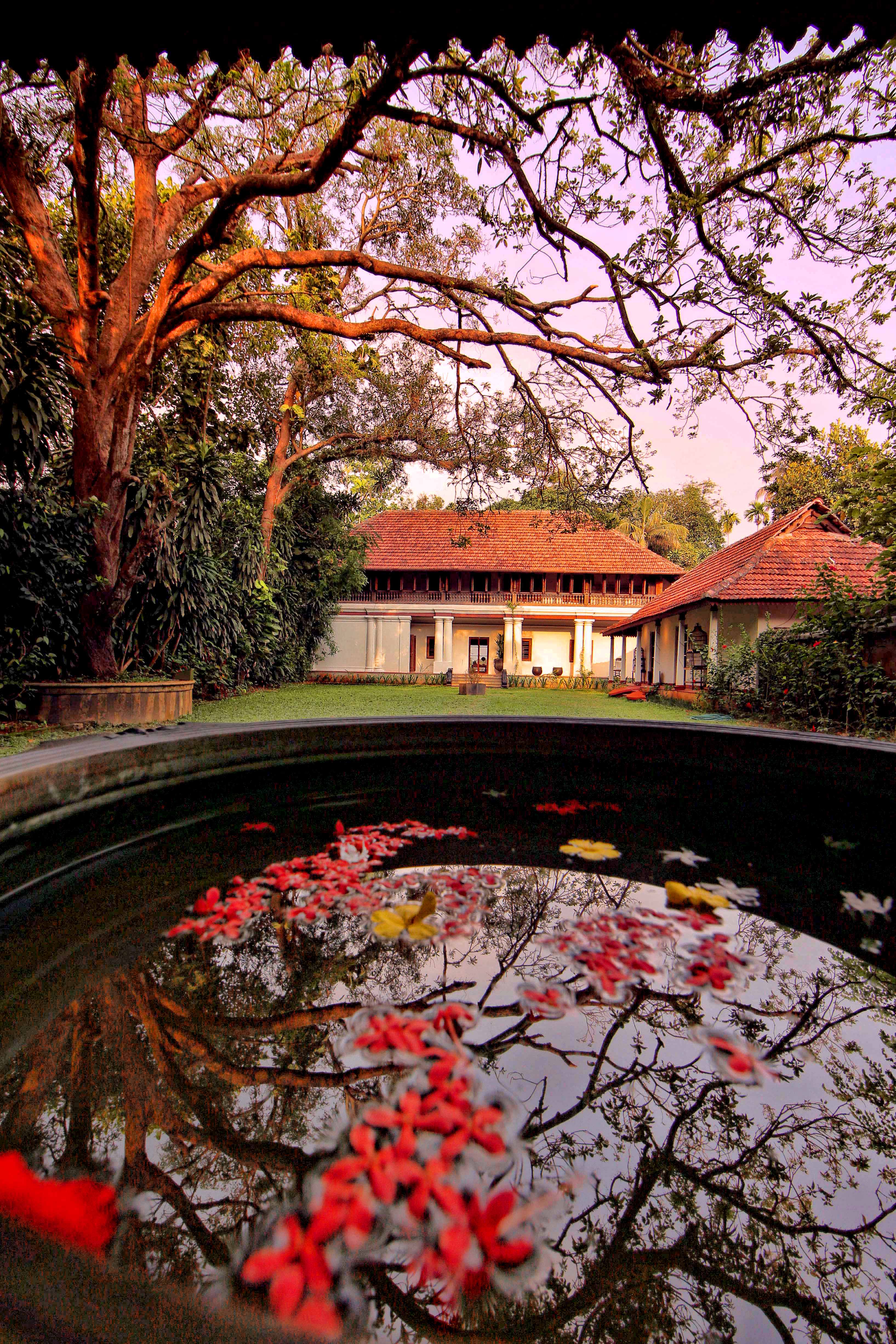 The Chittoor Kottaram is a ménage-à-trois between a princess of Kochi who inherited the Kochi Raja’s 18th century backwater retreat, Lady Hamlyn of the Hamlyn Trust in the United Kingdom who just restored the heritage property working with a local architect specialising in conservation, and CGH Earth who manage it. Dark wood is hewn into elegant ceilings, charming staircase, filigreed balustrade and pillars holding slanted red-tile roofs. All quintessentially Kerala. And amidst them are convened paintings from Rajasthan, North Indian paraphernalia, hefty chests and buxom furniture. Mr Dominic explains “kottaram” in Malayalam means “palace” and since Lady Hamlyn leases this mini-palace, he entertains her whimsical taste by regarding her as one of those eccentric royals who has travelled and stashed their shopping in their private residence. “JD” (as he is called) explains “kottaram” also means “private residence” and this is indeed the sole private residence of the Raja of Kochi, still royal-owned but open to guests as a heritage stay.
When Suresh, the princess of Kochi’s husband, comes to narrate this abode’s history, the less glamorous side of conservation is also intimated. He says the property, when inherited, was in ruinous state, with roof and walls ravaged. An accountant who worked abroad, he invested his life savings to restore the place and when his finances exhausted, was verging on selling when he contacted CGH Earth, knowing they are conservation-oriented. They introduced to him Lady Hamlyn with the ample funds required to restore and conserve cultural jewels like these. 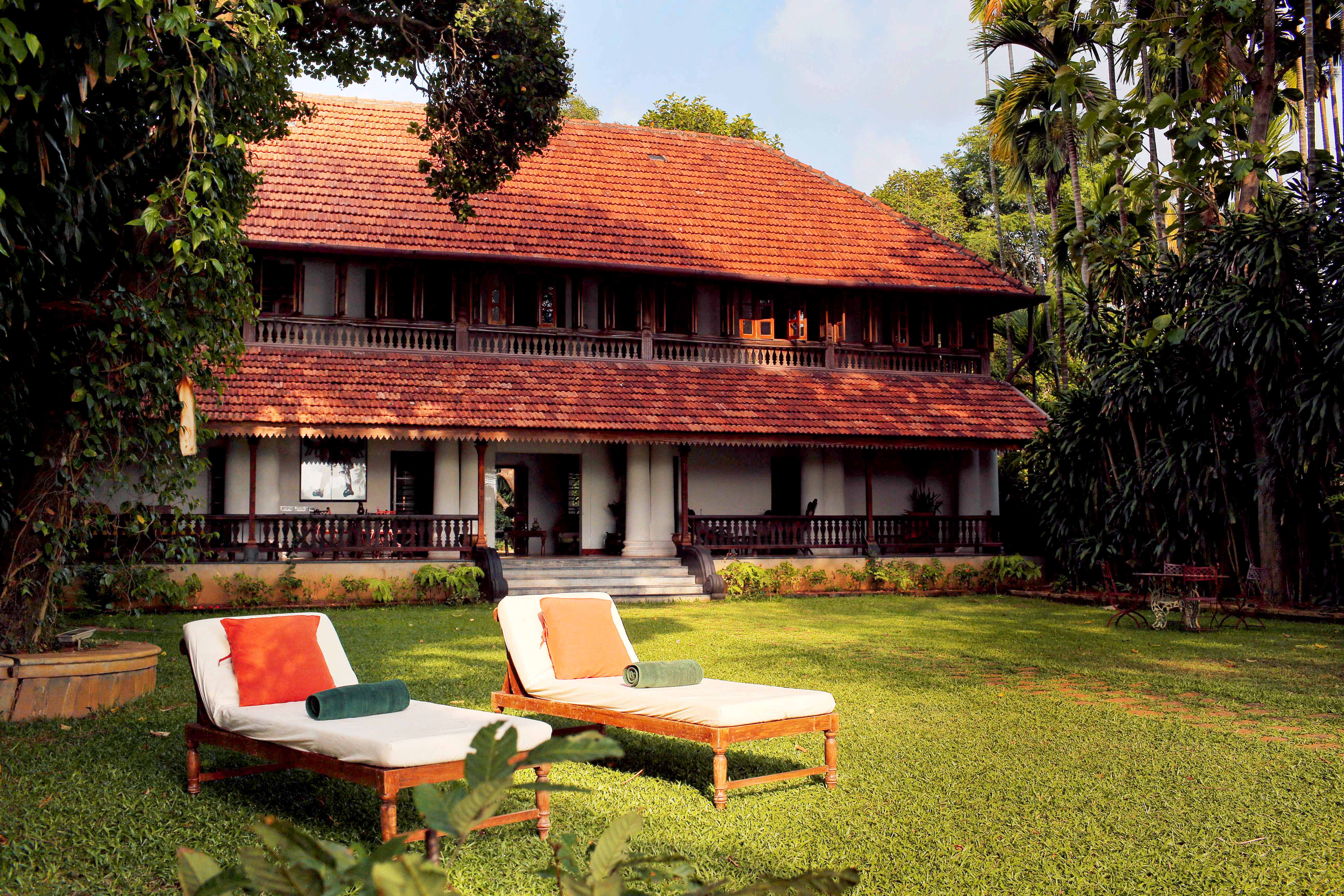 Brunton Boatyard takes conservation to higher echelons still. The colonial edifice is imperious. As you enter its colonnaded precincts built around a central courtyard where a historic cannon ruminates, you are asked to guess the establishment’s age. Easily 200 years old, you say. Would you believe that this assuredly “Raj-era” building was long a razed and desolate colonial boatyard that JD recreated from scratch, modelling it identically on the original structure. He has an immense sense of history and is an encyclopaedia of Kerala’s culture and even sourced old swing-fans from Fort Kochi’s antique markets to give an authentic colonial air. The parade of old portraits features figures historically relevant to Fort Kochi. Rooms conserve antique furniture discarded from old houses. The hotel’s History restaurant, which looks historic, has a menu compiling dishes from various communities that historically occupied Fort Kochi. East Indies at Eighth Bastion showcases an intriguing menu of dishes culled from various Dutch ports in the East Indies. And so you have a taste of culinary conservations too. 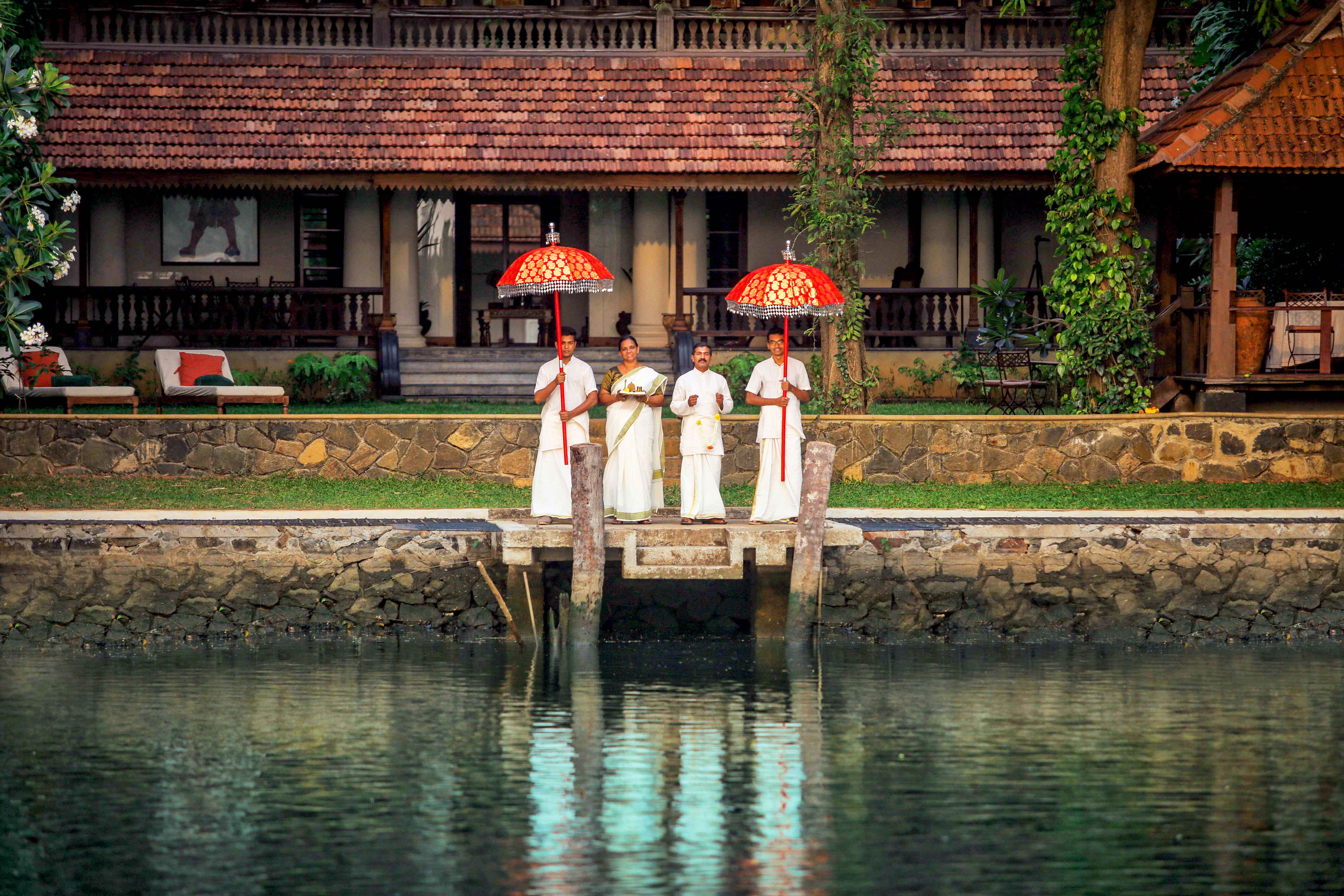 Muziris has been much in the news since Roman coins and miscellaneous foreign objects were excavated. It has also become the site of the Kochi-Muzuris Art Biennale that some say is ranked third in the world. This is the ancient port to which St Thomas the Apostle came bearing Christianity and which has one of the first synagogues in India, besides the first mosque in Asia. The guide tells how teak and ivory were taken to build the Temple of Solomon since when Jews have been in Kerala. Once Israel invited back Jews, Kerala’s Jews left, some selling their old houses on the street where the old synagogue stands. JD says he acquired these himself envisaging a B&B so as to conserve Jewish culture. Come evening, he says, the Jewish community would put out their tables onto the street and enjoy communal drinks and food. JD wants to restore some vestige of this charming practice. 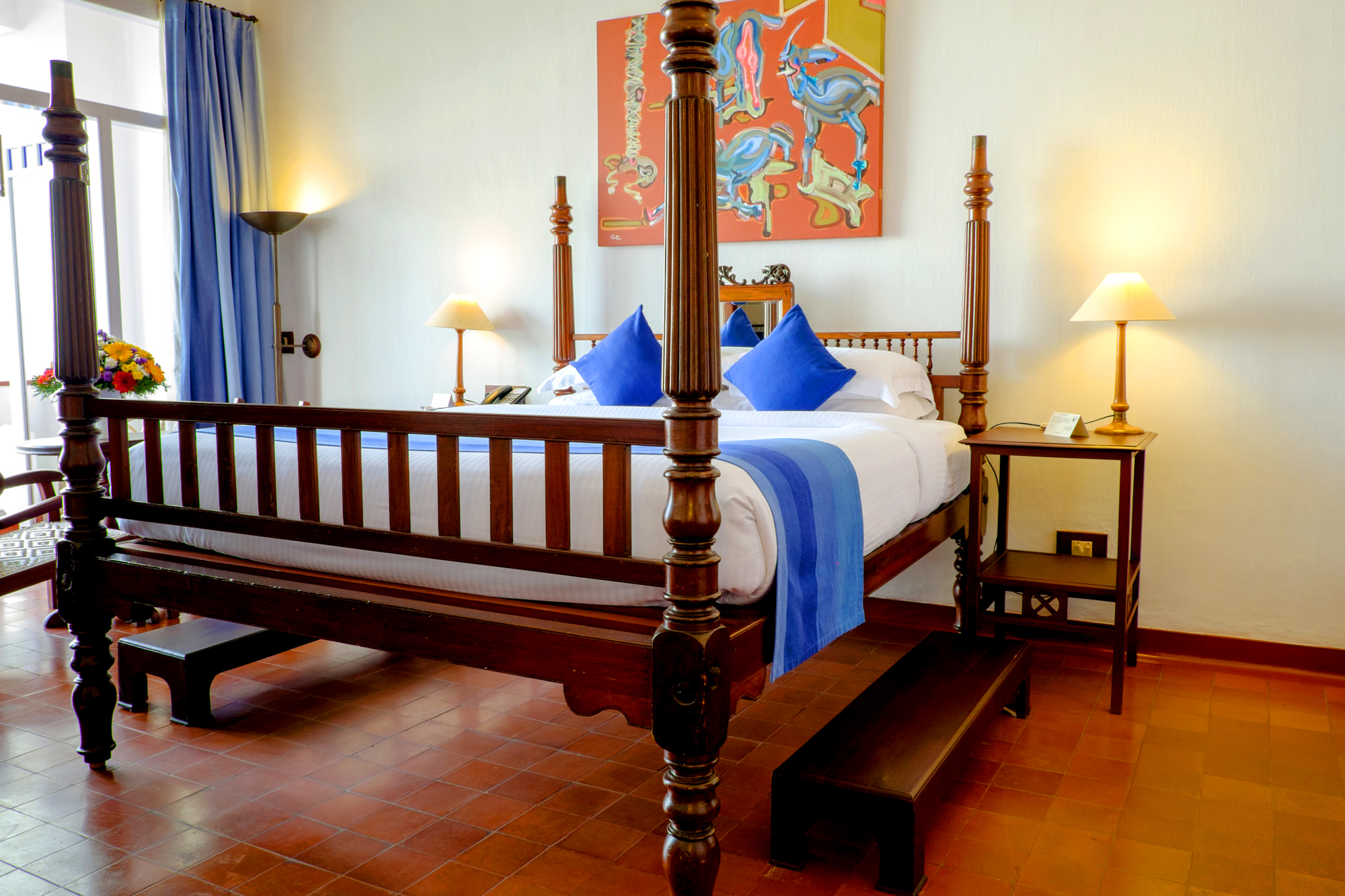 Conservation can be taken to root level—literally, proves Marari Beach Resort. Most of the resort is planted with palms with a clutch of villas interspersed in a rustic sprawl. There is also an organic farm where the resort revives traditional farming techniques, growing fruit and vegetables and some paddy and offers organic farm kitchen suppers. I experienced something similar in the Seychelles on Fregate Private Island, but Marari is the only extensive operation I have encountered since. And Kerala’s martial arts are kept alive and kicking by introducing them to ayurveda as in the vigorous Kalari massage that kneads your body only with the feet.