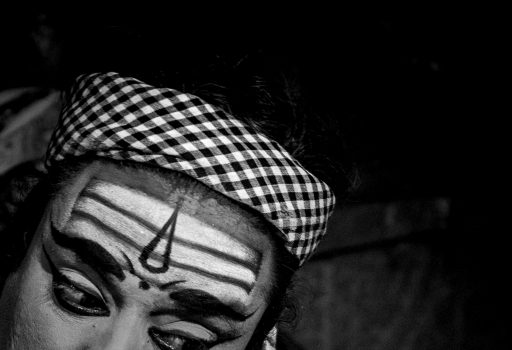 India traditionally values some visual symbols as means of conveying tenets of wisdom. Even if the deeper meaning is often not fully understood, collective wisdom has ensured that they are understood on some level by everyone. 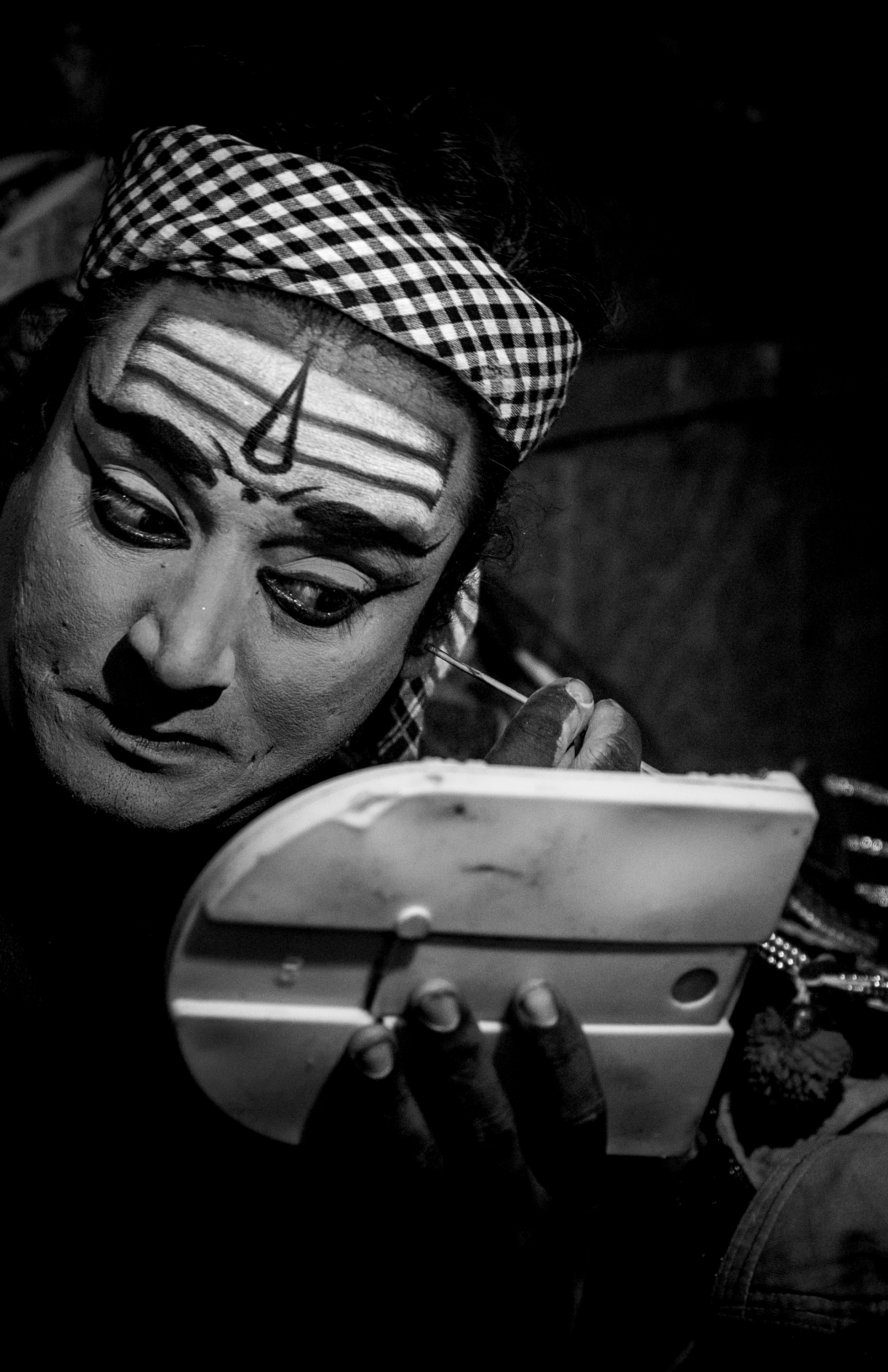 Every culture develops aids to jog the memory about tenets it holds dear, so that people are encouraged to practice these precepts. Over the years, visual symbols have evolved in India, shorthand for profound ideas and philosophies. Some are used as marks on the body, written on paper, etched in stone, fashioned as jewellery or printed on fabric. Others may be specific items from nature which have been invested with deep significance. Collective wisdom has ensured that these codes are understood at some level by every Indian. Here is a look at the more ubiquitous of these symbols.

Om, the primordial sound, is recorded in written form as ॐ. The three main curves represent the states of wakefulness, sleep and the one in between, dreaming. The dot on the top is the fourth state of consciousness. The semi-circle that separates the dot from the three curves stands for maya or illusion, and a reminder that this is what separates man from achieving a true realisation of divinity. The Om symbol is also believed to represent Lord Ganesh, and is deeply revered by Hindus. Often, it is put at the top of every hand-written page, especially ledgers of accounts.
Forehead marks are commonly seen in India. The most common is the bindi, traditionally a red dot made of kumkum, also known as sindoor, a mixture of powdered turmeric and alum or slaked lime. Powdered cinnabar, a naturally occurring form of mercury sulphide, may also be used. The bindi signifies the third eye, the one that provides spiritual insight. Kumkum applied at the hairline and along the hair parting signals a married woman. Although in ancient times both men and women wore a bindi, it is now almost exclusively a woman’s adornment. Stick-on bindis are available, and these have become more ornamental than culturally significant.
Then there are the horizontal or vertical stripes drawn on the forehead by Hindu men using vibhuti or sacred ash, usually with a dot of kumkum in the middle. These marks have diverse significance, but, essentially, the patterns remind the wearer that man should serve God.

The swastika is another auspicious symbol in India. It can be found in religious texts, at temples and on sacred articles. The roots of the word are su-asti – Let Good Things Happen.
The six-pointed star, made of interlocking triangles, carries special significance too. The triangle pointing upwards stands for Lord Shiva and fire, the other one for Parvathi, his consort, and for water. They are the two halves of a whole, and from their union, creation results.

The banyan tree and the rudraksha, seed of the rudraksha tree, are invested with a lot of meaning. Rudraksha seeds are used as prayer beads and the banyan is seen as the tree of life, drawing sustenance from many roots, branching out in different directions, but basically emerging from the same trunk, offering shade to many. 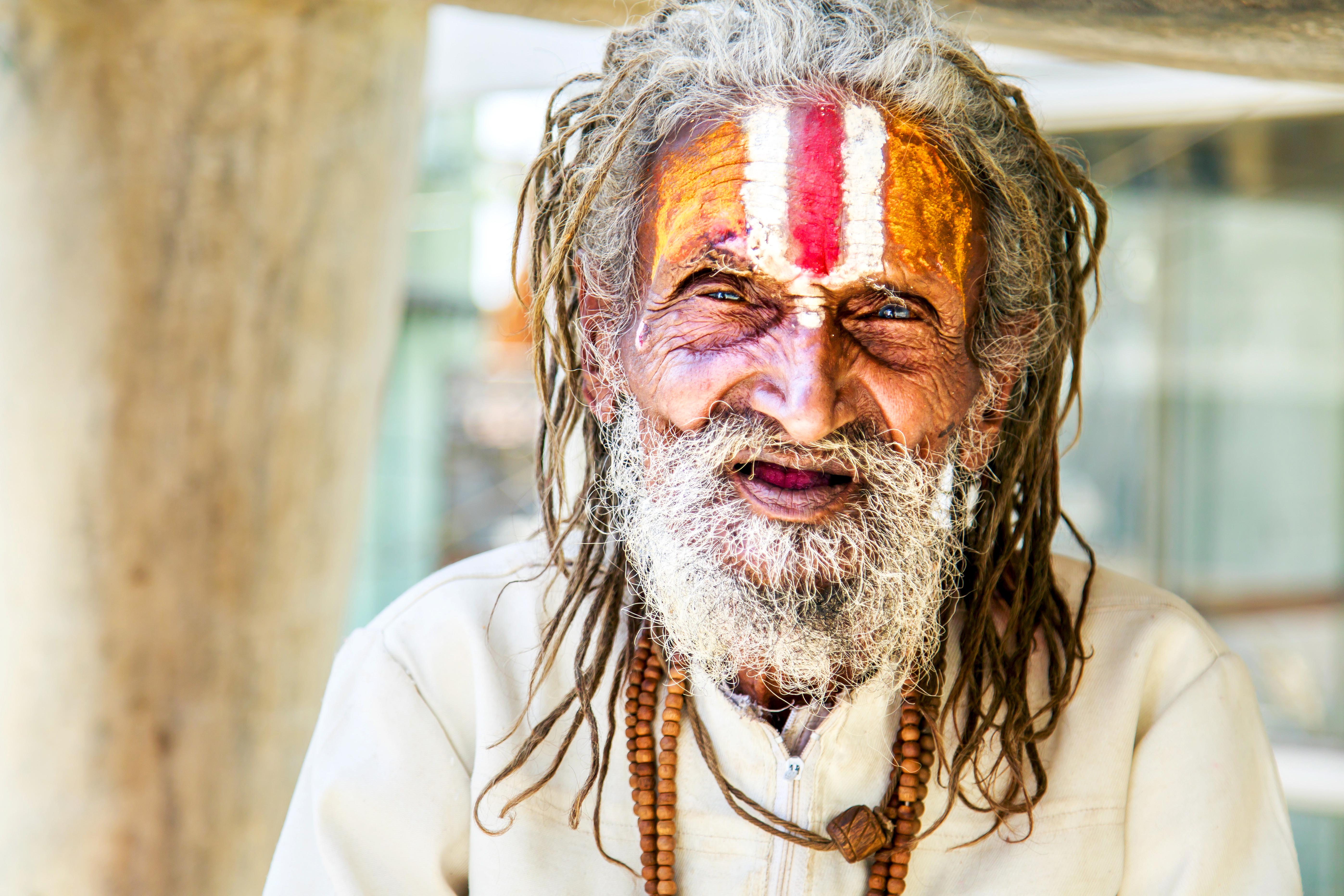 The Stuff of Legends

The great demon Tripurasura kept growing in strength. He became more and more powerful, until he became all but invincible. He used his immense power to torment all creation, both man and beast. Even the minor gods in the Hindu pantheon were intimidated by him. They appealed to Lord Brahma and Lord Vishnu, but both pleaded helplessness. The two joined the other Gods, and approached Lord Shiva, who was in meditation. The Gods petitioned Shiva, the Destroyer, to put an end to Tripurasura, and so stop the atrocities being committed on innocent people. Shiva decided to make use of his great weapon, Aghor. But he knew that deployment of the weapon against Tripurasura would have a wider, devastating effect. The thought brought tears to his eyes, and a few dripped down to the earth.
Mother Earth covered the teardrops; and wherever they fell, they germinated and grew into trees, known as rudraksha – literally, the tears of Rudra, the name of Lord Shiva in his destructive form. Lord Shiva is commonly depicted wearing bead ornaments made from the seeds of the rudraksha tree. 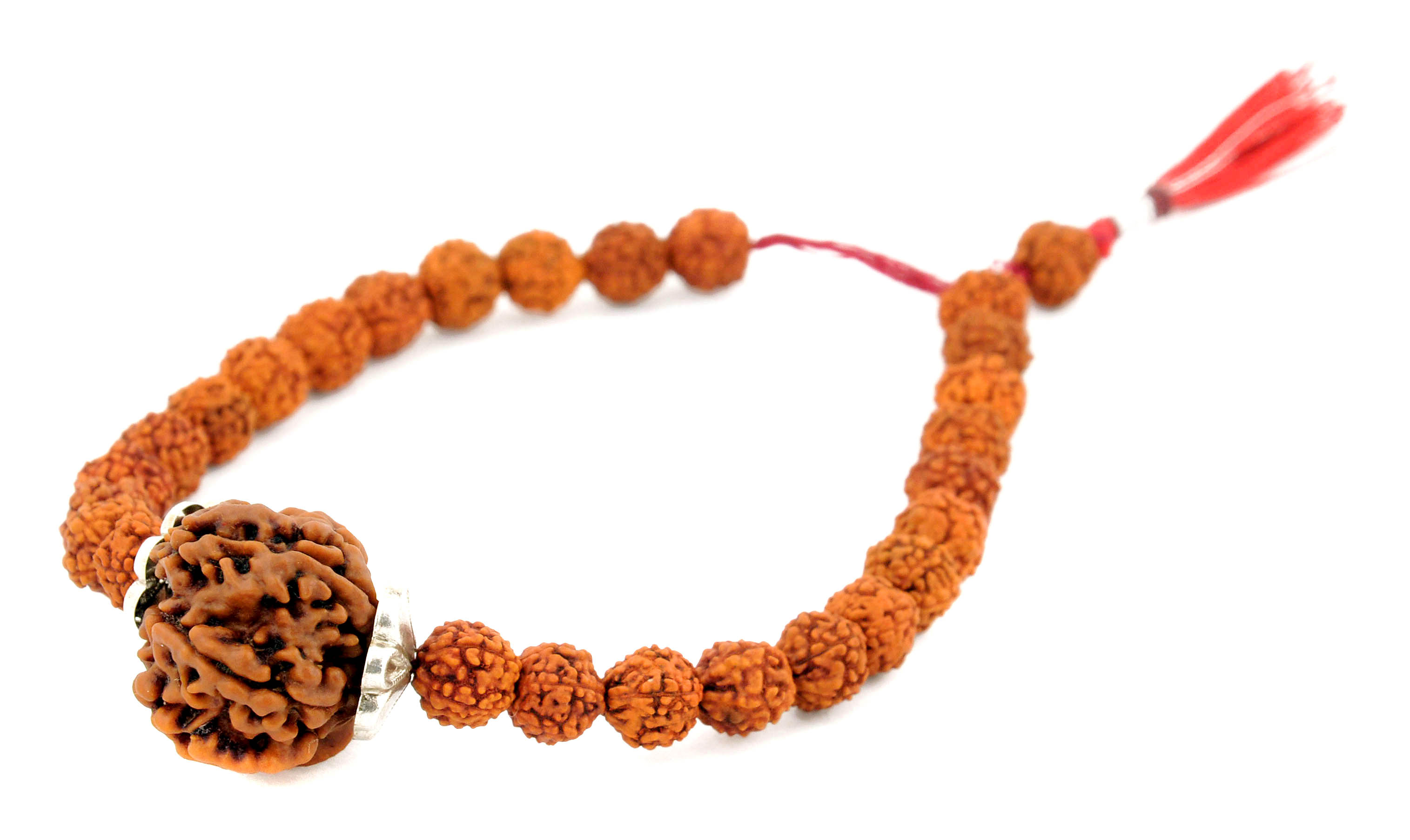 The components of kumkum are believed to have a soothing effect on the wearer. In particular, the benefits of turmeric, which contains curcumin, are now universally accepted. Mercury sulphide is thought to enhance sexual energy, and hence the association of sindoor with married women. Widows are traditionally prohibited from using it.
The power of geometric shapes to influence positive energy flow is something that ancient science from various civilisations endorsed. 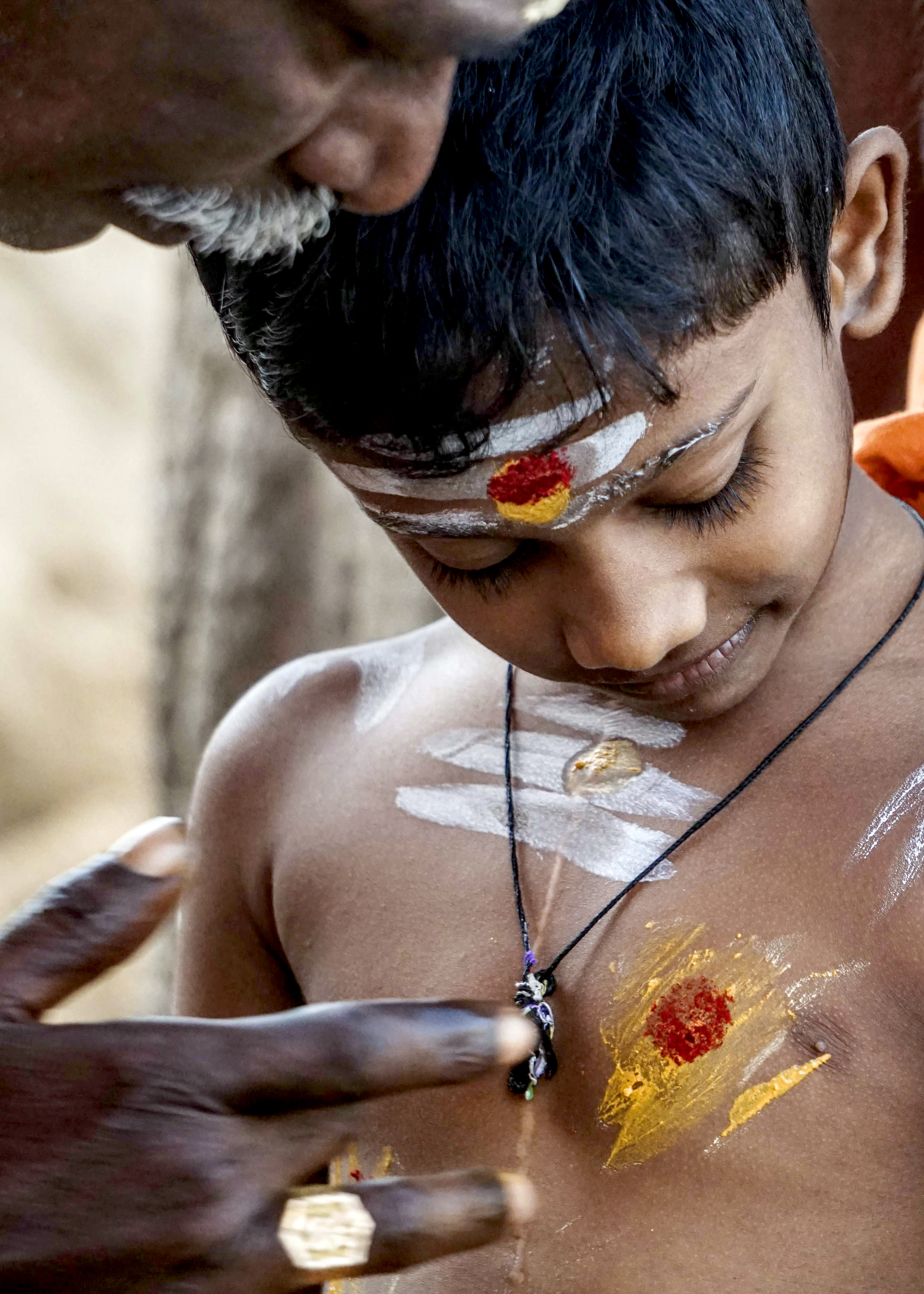 [My mind remembers how] with His soft lotus hands, baby Krishna grabbed His lotus-like toe and placed it in His lotus mouth, decorated with red lips, and sucked on it in amusement as He rested on the tender banyan leaf contemplating the next cycle of creation.
– From a devotional hymn to Lord Krishna 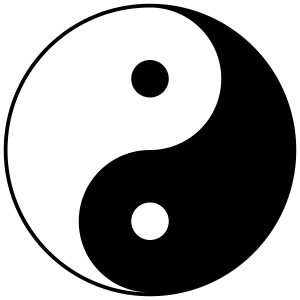 Many cultures, religions and belief systems have invested the six-pointed star or hexagram with significance. Most prominently, the flag of Israel features it, and in the Jewish context it is known as the Star of David. It is also used in occult practices. On another level, the union of opposites, it represents is echoed in the Yin-Yang symbol of China.
The tree of life is a common motif in many cultures, including the ancient Egyptian, Celtic and Babylonian traditions, and is also significant in Islam and Christianity. At a simplistic level, it signals the interconnectedness of life.
The use of beads in prayer is not unique to Hinduism. The Catholics use the rosary and the Muslims use the Misbaha for the same purpose. Buddhists, Sikhs and followers of the Bahá’í faith use prayer beads too. The number of beads on the chains used by the different religions may vary, but the purpose remains the same – to focus the mind on a repetitive cycle of prayer.

Put the kumkum and blessed rice on the head
Where will dwell right thoughts and noble action.
– From ‘Rakhi Day is Righteous Day’ by
Dr. A.P.J. Abdul Kalam