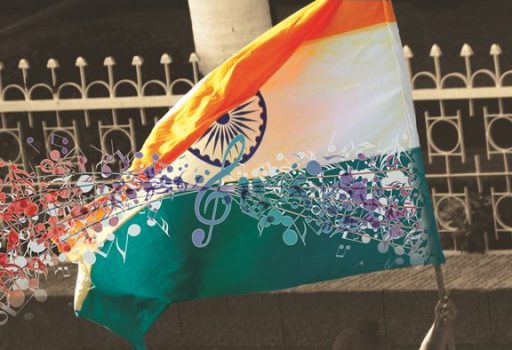 Sound can uplift and empower, as it can evoke strong emotions. Combined with words, it becomes a huge force. Thus, music has, and continues to play, a part in nation building or reinforcing the idea of patriotism. In India, we have a history of music linked to patriotism and a united nation. Perhaps the first manifestation of patriotic sentiment was the creation of Raag Desh*, some 300 or 400 years ago, somewhere in the Punjab, by an unknown senia ustad (maestro belonging to the musical tradition of Tansen, the father of North Indian classical music). North India was wracked more by constant Afghan invasions and looting, and perhaps this resulted in the creation of Raag Desh (desh means ‘nation’ in Hindi). One assumes the main note structure was in the form of a folk tune, which was added to, to take the shape of a concrete raaga.
After the Indian Mutiny of 1857, there was pent up anti-colonial feeling that manifested itself in the formulation of political parties, nationalist literature, and songs. Vande Mataram, whose first two stanzas have been adopted as India’s national song, was first penned as a poem by Bankim Chandra Chattopadhyay in 1892. The poem glorified India in the form of a mother, and was sung in Raag Desh by Rabindranath Tagore at a session of the Indian National Congress in 1896. (Listen to a rendition of Vande Mataram)

National sentiment was also expressed in the ideal of a united India, one that was able to bring together and benefit from its diverse strengths. One such poem, which expresses this idea beautifully, is Sindunadhiyin Isai, which was written by Tamil poet Subramania Bharati. In it, he urges the people from the different states to work in harmony and barter the best of their regions with others – in line with the currently popular idea of sustainable growth and development. While the exact date of writing the poem is unclear, it may have been written in the early 1900s (as Bharati himself died in 1921). The poem was set to music for the film Kai Kodutha Deivam (1964). (Watch the original movie song)

Composer Mohammed Iqbal, who worked as a lecturer in the Government College Lahore, composed Saare Jahan Se Acha (‘the best nation amongst nations’) in 1905–1906, which is today one of the most popular and best-known national songs. The original tune, to which it was sung in the 1930s, was slower and sombre. Pandit Ravi Shankar composed the currently known, more upbeat, tune around 1946. (Listen to Pandit Ravi Shankar’s composition)

After independence, Indian composers, mainly from the three forces, composed several Indian military marches and martial tunes to reinforce the idea of the Indian nation, and to provide a distinct alternative to the military marches of the British. Scottish reels gave way to Indian tunes, which not only sounded more ‘Indian’, but whose rhythms were based on Eastern music as well.

Patriotic film songs were also popular, especially before the 1962 and 1965 wars. These were mainly martial in style. The sound of airplanes overhead, the silent movement of troops, blackout at night, a feeling of anxiety – all this can be recalled by listening to one of the many songs that were composed during that era. After the 1963 war, the much-loved Ai Mere Watan Ke Logon (‘Oh, people of my country’), famously sung by Lata Mangeshkar, is one such popular song. Apart from the moving words, the melody was structured to build up to a moving crescendo. (Listen to Lata Mangeshkar singing this)

Patriotic songs in recent films have had similar, exulting lyrics, and celebrate a nation that is growing to adulthood and achieving its potential – Chak de India (from the movie of the same name), and Jai Ho (from Slumdog Millionaire) are a couple of examples.

In the classical genre too, patriotism has infiltrated music compositions. Ustad Amjad Ali Khan, the renowned sarod musician, famously named a raaga he had composed as Bapu Kaus, after Mahatma Gandhi (who was called ‘Bapu’ or ‘father’). Instrumentalists such as Pandit Vishwamohan Bhatt and Pandit Ronu Majumdar play patriotic songs as part of their classical music concerts. Songs that incorporate words such as the Bengali Ekla Chalo Re (‘Together, we walk on’) are a regular part of many artistes’ repertoire.