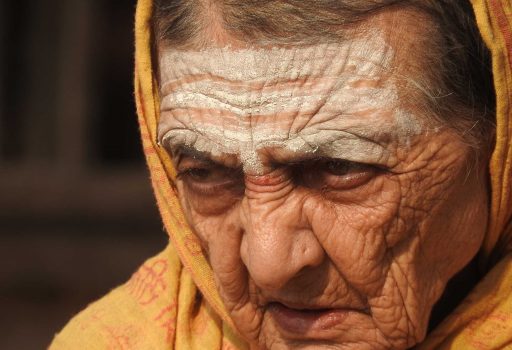 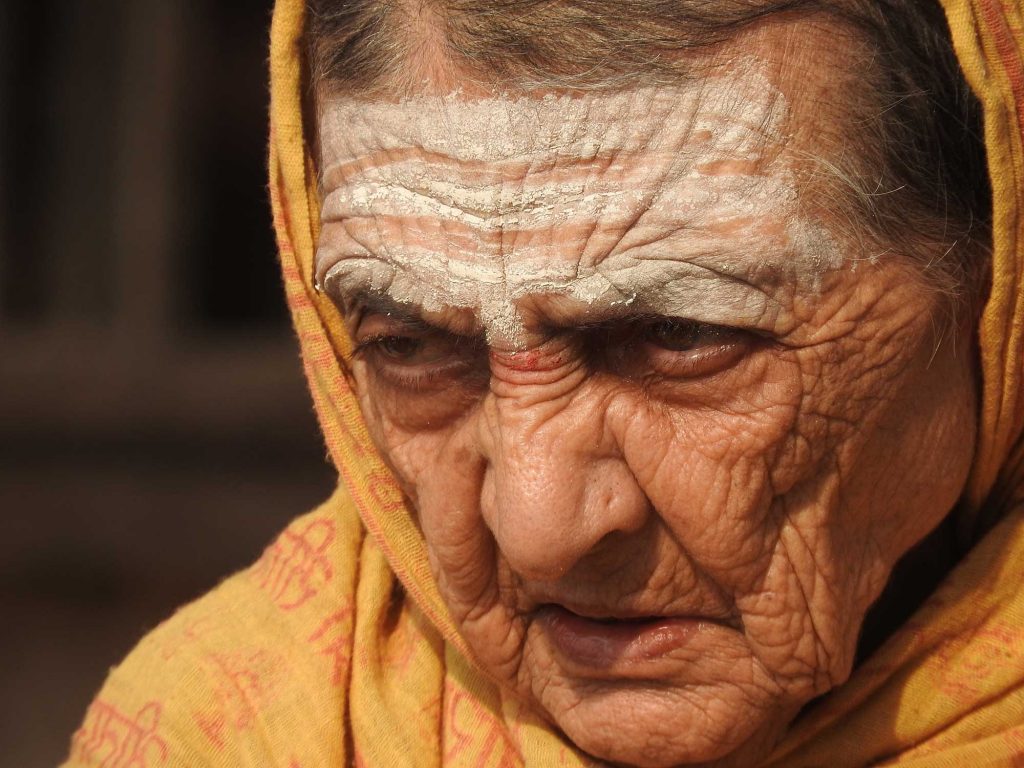 The Nilgiris or Blue Mountain in South India is home to several famous hill stations, picturesque towns far above sea level where in colonial days the British could retreat from India’s dry, dusty plains during the oppressive heat of the summer.

In those days it was a rather exclusive enclave, but after independence, I moved with my mother and sister to a town with beautiful vistas and meticulously kept gardens that well deserved to be called a ‘little England’.

Many dauntless British and Europeans still lived there, but despite coming from the plains, my mother soon earned a reputation as one of the best walkers around. In the next village from us was a lively bazaar where we used to do our shopping. The bus passed right in front of our cottage, but my mother always preferred to walk. And although there was a beautiful roundabout road with a very gradual gradient, that route would have taken a couple of hours round trip. My family has always been walkers, so she would say, ‘Let’s go straight down the hill.’ And she would walk downhill, do her shopping, and walk back uphill again, two and a half miles each way.

Going down was not too bad, but when time came to return, I used to suggest we take the roundabout road. ‘Why?’ she would ask. ‘Let’s go up the same way we came down.’ Halfway I would begin to pant, and to conceal from my mother that I was falling behind, I would say, ‘Let’s admire the scenery.’ We would stop until I had recovered my breath enough to go on. My mother was a very sagacious person, and after a while, when she saw that I was lagging a little behind, she would say, ‘Son, shall we admire the scenery now?’ It became quite a joke between us.

Many years later, my mother came to join us in California. Here she lived to be over eighty, and in her last years I used to remember those scenes on the Blue Mountain when I saw the difficulty she had every morning in even getting out of bed and moving about. We couldn’t even let her walk by herself; she always needed support.

This is the nature of the body, to pass through all the stages of life: to grow, to age, and eventually to decline and pass away. I have often quoted the words with which India’s greatest poet and playwright, Kalidasa, describes the goal of the last of these stages: ‘In retirement, live like sages; at the end of life, let the body go.’

Most of us can relate to living like sages; even if we don’t quite qualify, we can see the appeal. But ‘let the body go’ doesn’t sound appealing for any age. The words become meaningful only when we understand that they mean letting go of identification with the body — that is, not clinging to the body as it declines, but letting go of the obsessive idea that this failing body is what we are.

Letting Go
I have been looking at the commemorative volume presented to me for my eightieth birthday, The King’s Messenger, which has a large number of pictures. On the opening pages, there I am as a teenager. Then a few pages later, I am in my forties, and finally I am in my late seventies. But if you ask me how I have changed, I would not say I have grown older. My body has grown older; I have grown wiser.

This brings a new perspective to the passage of time. It is true that I can’t swim or run like a child any more, but as all the great spiritual teachers say, this is nothing to gnash one’s teeth about. Clinging to the body for identification can only bring increasing insecurity as we age, because we are identifying ourselves with something that is inevitably on the wane.

When the light is lit within, all of us can look forward to a breathtaking future of increasing beauty as we age.

The Buddha conveys the urgency of this message with a universal image. ‘You are about to go on a long journey,’ he says. ‘Don’t you want to be prepared?’ This is not rhetoric. The body may not be going anywhere, but rest assured there is an inner person with an itinerary and a destination. If you have a ticket for Europe, don’t you plan what you want to take? Don’t you ask in advance what the airline will allow? At this border there is no forty-pound limit: nothing material can cross. Whatever you’re carrying, you can’t take it with you.

The only baggage you are allowed — in fact, the one thing you can’t help taking with you — is who you are: your character, the contents of your consciousness, the lifetime accumulation of all that you have thought, done, felt, feared, coveted, and loved. Don’t take any negative attachments, the Buddha urges us.

Don’t take any anger, any hostility, any resentment, any greed or selfish craving. Throw it all out now, while you can. Lighten the load.

Older people often tell me that in these years they feel the need to get rid of the possessions they have accumulated: furniture, photographs, papers, letters… ‘We don’t want to leave this for our children to deal with,’ they say. I want to tell them, ‘Don’t spend your time on things like that now!’ If you have the detachment just to call Goodwill and deal with it in a single stroke, well and good. 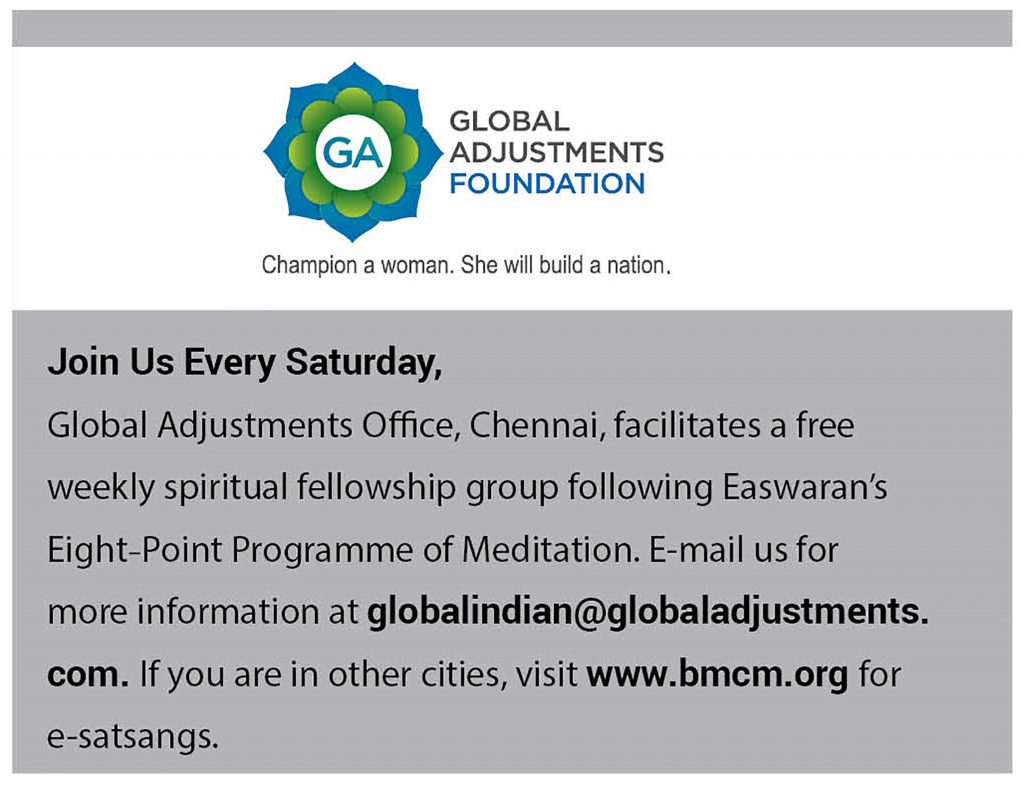 But rather than go through each letter, each photograph, each memory, it’s much better to leave everything in the garage for those who come after you. I can assure you that they will attend to it with much more detachment, and letting it go now will be far less painful than having it torn away at the time of death.

Excerpted from an article in Winter 2012 issue of A Journal for Spiritual Living, published by the Blue Mountain Center of Meditation & Nilgiri Press,
www.easwaran.org